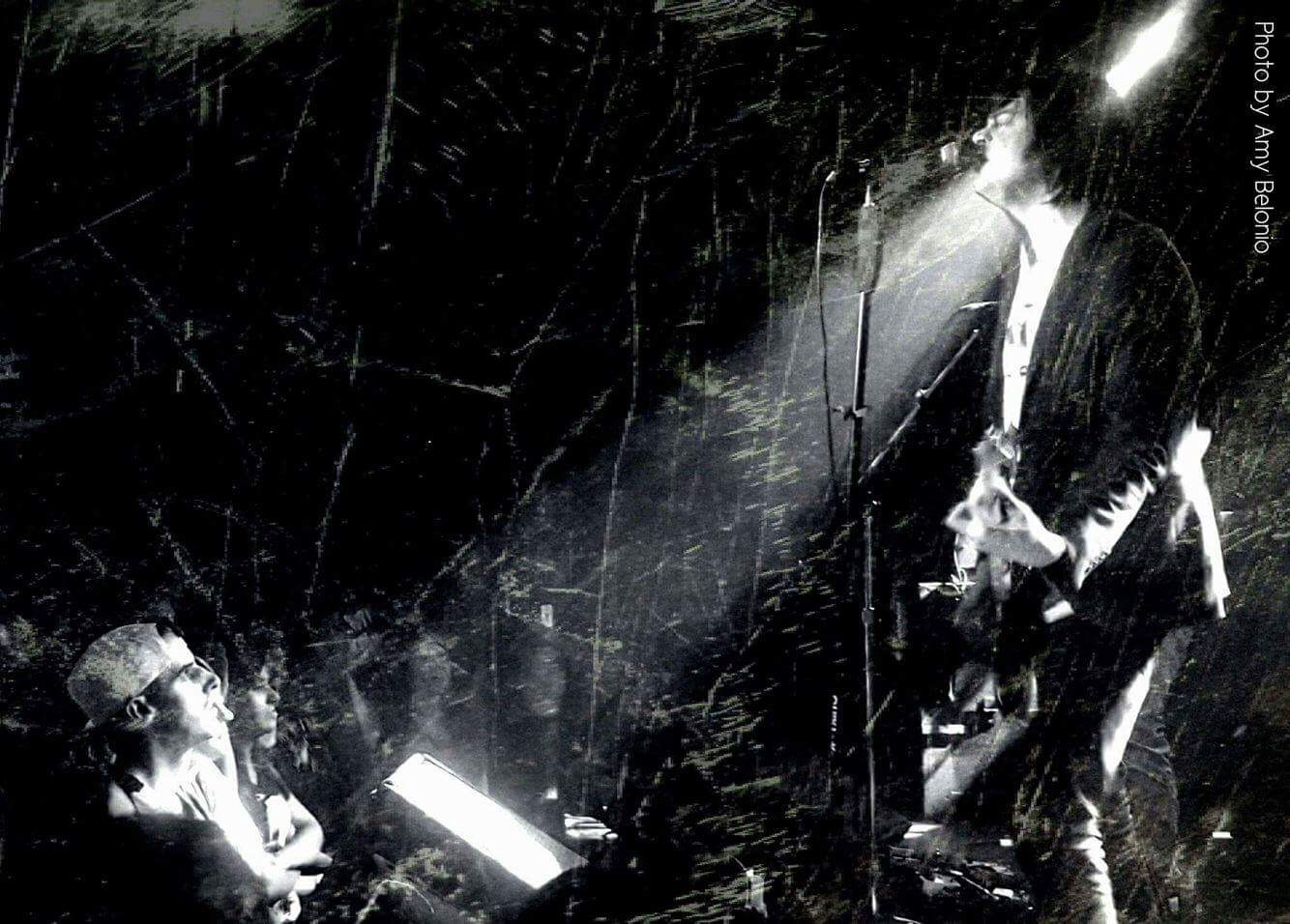 Above:  Adam Krier of AM Taxi performing at the legendary Double Door in Chicago on May 13, 2016

Mandy’s eyes flutter shut as she releases a caged memory. “A few years ago,” she begins. “I didn’t want to…be here anymore. When things got really bad, I started listening to his music. And it’s not like he saved my life but hearing his songs put me back down on Earth again. So, after last week’s show, when I walked up to him and he opened his arms and gave me a hug like he knew who I was…It was like a warm blanket wrapped around me. I have to see him again.”

Mandy removes her smart phone enthusiastically from her hip pocket like a prized pistol from a tight holster. She shows me selfies of herself and the man who saved her life through music.

“I get it,” I nod, validating her experience and the impulse to reconnect. I get how a song can be a life preserver that pulls you back to shore. And I get how a singer’s voice can feel like a mystical navigator when you’re alone in the car, in life or both. It’s the eternity within ourselves that makes the head swirl. The mind spins with words, images, beliefs and emotions that can hardly be articulated. So if anyone can tame our inner, wild boar into submission, they become a hero.

My favorite songwriters dazzle me with words. They also compose rhythms I didn’t even realize my fingers needed to pluck out on the steering wheel. How did they know? But, I’ve come to accept that it’s not about the hypnotic voice, choreographed finger-tapping or the prose. When I see myself in a song, I’ve really been given the unique gift of observing myself from the outside. The best healing occurs when observing the self from the outside.

Mandy resets her glasses atop the bridge of her nose and confesses, “My mom thinks I’m crazy because I love music so much. She doesn’t get it. She thinks I’m totally crazy for wanting to travel 400 miles to go see his New Year’s Eve show.”

“She doesn’t get it. She thinks I’m totally crazy for wanting to travel 400 miles to go see his New Year’s Eve show.”

“Why?” I ask already knowing her answer. “Why do you want to see him again?”

“Yeah, I hear ya. But, you won’t be satisfied,” I predict. She looks confused but I’m speaking from the experience of having spent quality time with a few of my favorite songwriters. Sometimes, after an interview, the artist and I would find ourselves coordinating their touring schedule with my out-of-town travel for work so we could talk again. But I’ve been raised to sit peacefully with frustration and longing, so that’s what I did. The urge to reconnect eventually fades until the next lyricist comes along to coach me through another physical, emotional or existential crisis. And so, another cycle of longing would begin until I finally figured out how not to have expectations of my heroes.

Still, I imagine that for Mandy, to get to know this songwriter would probably be like jumping off of a high dive, into the deep end and never being able to touch the bottom. If he actually gave her permission to swim inside his soul, there would be nothing tangible to grasp. And that would be perhaps even more frustrating for her.  At best, she’d have a dream-like story with a lot of chronological gaps and maybe a crumpled up receipt for two cups of coffee.

“In a genuine relationship, there is an outward flow of open, alert attention toward the other person in which there is no wanting whatsoever.”

Heather is a fan of a different songwriter. She sets a square of Asiago cheese onto a round rice cracker. “If I actually met her,” she holds the stacked cracker between two fingers as if she might smoke it. “It would be so easy because it would be like meeting myself. The first time I ever heard one of her songs, it was like I was hearing myself. I was saying to myself, That’s me. You represent how I want to live my life. This is how we should treat people.”

Heather speaks to how we were all born complete and somehow, life cleaved each one of us. Most are on a hunt to reclaim the dispersed treasure pieces of ourselves. At the same time, we also embark on a mission to gather “our people.”  Those who have a deep appreciation for music are like members of an ancient tribe that disbanded thousands of years ago. And today, we’re trying to find our people again and reassemble. More specifically, when fans of the same artist find one another, the connection is strong. Oftentimes a common language is spoken. Speaking the same language and wearing the same symbols is part of what holds these tribes together.

She continues, “When I went to her show this spring, everyone there was connected. The entire audience was singing along to every song and wearing different concert tees from her career. It was so unifying. Every t-shirt a fan wears has a story, you know? So I was telling strangers hanging around the merch booth, ‘Yeah! You need that shirt! Go buy it!’ If I’m still alive when she dies, I will be in total mourning. I’ve been a fan of hers for at least 20 years and I still wake up every day for her art.”

As in seed dispersal, songwriters get disseminated across the planet. And, each song has its own vector like the airwaves of radio, a TV commercial or a digital stream. They plant their seeds in us. There are different artists with different messages for different stages of soul-development. Just as in nature, the spread of good music is about the survival of the “parent.” However, in this case, the parent isn’t the songwriter.

Good artists know it’s not about them.

Musicians who are truly in touch with their art kinda “click-out” when the song starts. Then they plug back in when the song’s over. And when they write, they say that it’s not them composing;  It’s as if they’re just receiving the song from someplace else. Whether in a state of creation or performance, they separate from themselves. And we observe the transfiguration taking place while they’re coasting on delta and theta waves and think: Where did they go? How can I get there because it looks really trippy and really cathartic?

So, an obsession with a songwriter isn’t really about the artist. It’s about the listener’s urge to transcend so that he can find himself in the song. Your favorite songwriter might be holding a tuning fork that makes your core vibrate but you don’t need to grab the tuning fork or the person holding it. To focus your awe on the artist is idolatry but to dive into yourself is divine. Follow the vibrations to see what the song is saying about you. Then, rest with it.

“Your favorite songwriter might be holding a tuning fork that makes your core vibrate but you don’t need to grab the tuning fork or the person holding it.”

“It was a bit of a surprise when she invited me to attend her wedding a few years ago,” Evan writes me late one night about getting to know one of his favorite songwriters. “Of course, I went and I had a blast.”

Since the age of 22, Evan has attended approximately 1,000 concerts. Good attendance, proper social graces and being helpful has awarded him solid friendships with several musicians. In some cases, he helped artists organize legs of their tours. Others crashed on his floor. And, in return, they’d put on a free acoustic performance on his back deck. But there was one songwriter, in particular, that offered friendship and then invited him to her wedding.

Evan replies, “This is interesting, because I might plan a trip around that musician’s performance schedule. So, I’m more inclined to look up a musician friend than another friend.”

I press on and email him again: What do you think you offered her to reinforce this friendship over the years?

He responds, “She’s made a few comments about some of her weird fans and implied that our friendship wasn’t weird. I think there have been exchanges between us that instilled her trust in me. She’d share unreleased music with me, knowing she could trust me not to further distribute it. Really, she’s such a nice person. The friendship seemed to happen so organically and wasn’t impeded by her ‘fame.'”

“So, what’s his name?” I’m surprised it’s taken me this long to ask Mandy.

I’d heard of him but never listened to his work. So, the next day, I watch his live performances on YouTube.

There’s something about an artist that reaches down into themselves and squints their eyes to wring out every last drip of emotion. I’m not even in the mood to be moved. Then, he repeats a line in a song that cuts through me as I spontaneously hemorrhage with stark self-awareness. I take out my phone to text Mandy and observe myself scripting a scene from my life. I imagine myself in the passenger seat, next to Mandy, driving 400 miles to see this guy play a New Year’s Eve show.  Next, I see myself ghosting out of another show. Soon, I don’t see myself going at all because the images were all a fantasy, not a premonition.  A momentary ache overcomes me. I return my phone into its holster and start writing in an attempt to connect with my tribe…

(Note: The names of the fans in this story have been changed and the artist’s names removed to add to your frustration).

To join in the conversation, look for our group page on Facebook at Music Makes You Think.