It Will be Burned: Josh Dun and his SJC Custom Drums for twenty one pilots

“I grew up trying to be as thrifty as possible,” says twenty one pilots (TØP) drummer Josh Dun. “I built my own desktop computer because it would cost a fraction of the price of a brand-name computer.”

As a pre-teen, Dun frequented a used music store and practiced on the electronic drum floor sample. When his percussive obsession demanded a full kit, he remained frugal. He went on eBay in search of wooden shells, casually strategizing where to drill holes before bidding on a used SJC Drums kit.

Fast-forward a few years later, and coincidentally, SJC would search for Dun.

According to SJC Drums co-founder Mike Ciprari, he had heard about Dun through a mutual friend and drum tech.

“He said he’s friends with the drummer in this band called twenty one pilots out of Columbus. They were talking with labels and about to play a big show in Ohio,” Ciprari recalls.

It was the middle of the band’s Regional at Best Tour, following the 2011 release of the record. It was the middle of the night. Ciprari and a friend texted Dun. Surprisingly, or perhaps not surprisingly, Dun answered. Ciprari expressed interest in working with him. Although Josh was in need of a more durable touring kit, he remembered being honest with Ciprari about his intentions.

“That’s cool,” Ciprari answered, before offering Dun to give him a call if he needed any building tips.

Musical carpentry wasn’t realistic for Dun, given the band’s fast trajectory. Already attuned to the company’s reputation for quality and authenticity, Dun instead joined the SJC family.

The first item SJC ever made for Dun was a light blue acrylic kit for one of their biggest gigs at the time: a show at the Newport Music Hall in Columbus. It would later appear in the music video, “Guns for Hands.” 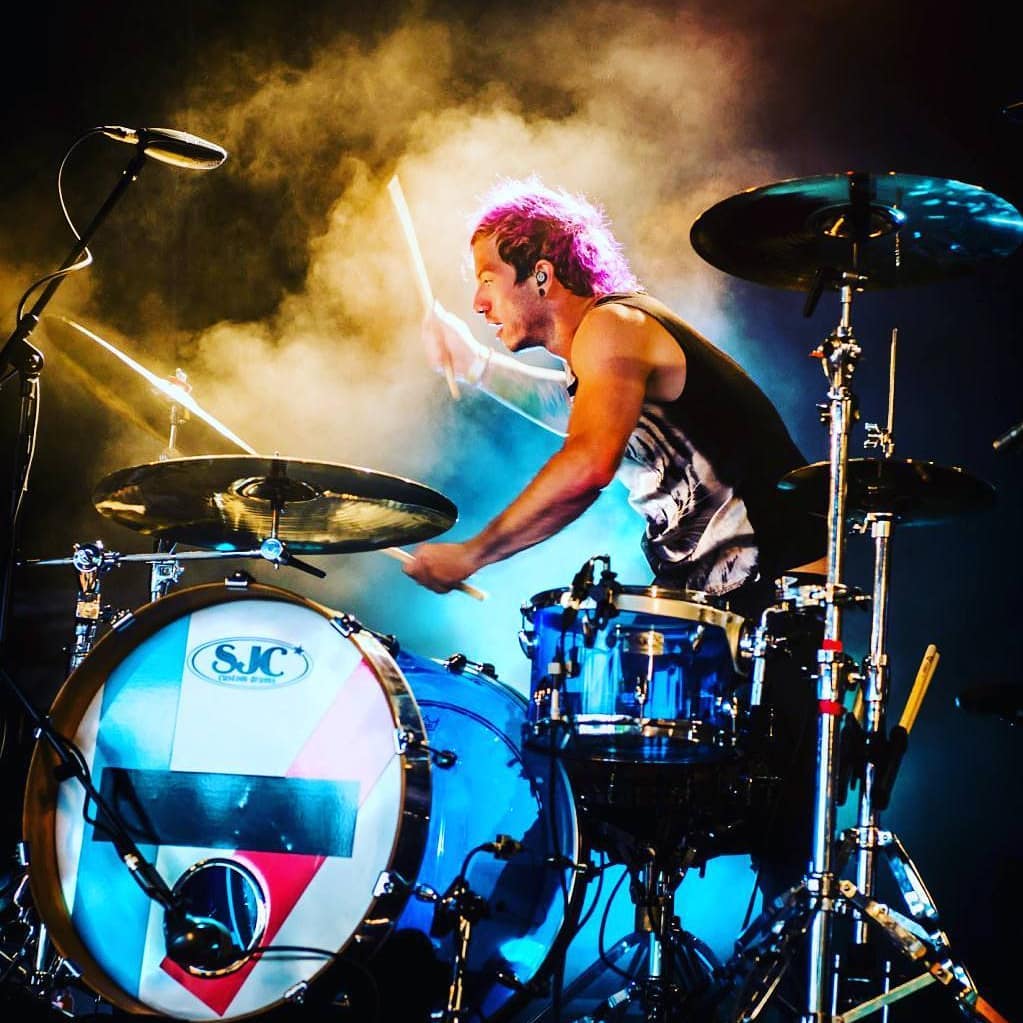 Soon, SJC was supplying kits for tours, award shows, and music videos. Oddly, some of the most iconic twenty one pilots music videos didn’t actually utilize full SJC kits, but for good reasons.

For the “Heavydirtysoul” video, Dun offered to use a real SJC Kit, but he forewarned Ciprari, “It will be set on fire.” Instead of destroying a perfectly good kit, “We bought one at a used drum store for $100, but a real SJC drum head was set on fire,” Dun says.

Later on, for “Stressed Out,” (currently boasting 1.7B views on YouTube), Ciprari reports, “That wasn’t an SJC drum kit either. It was a $50, unplayable, little kid’s beginner kick drum and a snare. Josh wrote SJC on the bass head in black marker. I was like, ‘Dude, I can’t even tell you how appreciative I am of that. That’s even cooler than having a real logo on there.'”

SJC supplied drums for Dun’s personal studio in Los Angeles, and as the band grew in popularity, multiple units were needed for international tours and large arenas, including:

– Practice kits.
– Straggler kits for TV performances.
– An ever-sprawling kit for the main stage.
– A “crowd kit,” drilled onto a platform and hoisted above fans’ heads as Dun plays. (Note to fans: The crowd kit is heavier for the Bandito Tour because it’s acrylic instead of maple.)
– B-stage kit for mid-show songs (SJC M5, maple).
– Two bass drums that are, again, lifted into the air by fans while Dun and singer-songwriter Tyler Joseph enthusiastically pound out the last song at each show.

Ciprari adds, “A lot of bands will have a new kit made for a new record cycle or tour but there’s not many bands that follow a theme the way twenty one pilots does.”

TØP fans (a.k.a. Clique) are the first to declare a new era when a new album is released. They pay close attention to fictional characters (some new, some recurring), symbolism (invented or, at times, allegedly Persian or mathematical in nature), fonts, and a distinct Pantone color palette. These elements appear on record covers, within lyrics, onstage costumes, merchandise, and even on the instruments themselves.

So, is there a different percussive theme for each era?

“That’s a really good question,” Dun says. “We’ve never really dialed in what we’re going for, but I do think each album has a different feel and, I guess, a percussive theme. When Tyler and I are writing stuff, we’re ultimately thinking about how it’s going to look and feel and sound on stage for our fans.”

While Dun obviously composes the lion’s share of rhythms, he confidently discusses the times when Joseph steps in with recommendations.

Dun explains, “Writing drums happens a number of ways. There are times when Tyler is particular about a beat. But there’s something that I really like about a non-drummer like Tyler coming up with drum parts. Sometimes he’ll send me tracks with drums and I’ll change it to what feels right for me. A lot of times, he’ll send something and I’m like, ‘I never would’ve thought of this. I don’t think a lot of drummers would think of it this way,’ and that’s because he’s not a drummer. I like that.”
In other words, Dun and Joseph speak the same musical language. However, each draws from different rhythmic sentences. Yet when it comes to adding new pieces to the kit, that’s entirely at Dun’s discretion.

While the SJC Spooky Kit from 2015’s Blurryface Tour was an acrylic and maple hybrid, Dun has returned to the fat, wet and punchy sound of acrylic on the new SJC Bandito Kit. The most notable addition to his mainstage setup is the ballad snare, which is placed just to the left of his Zildjian hi-hat. The ballad snare boasts 14×14″ dimensions with beefy, 40-strand wires strung on the bottom.

Dun references songs to describe the sound of his new snare, citing, “I use it in ‘Jumpsuit,’ a lot of the song in ‘Morph,’ and I play it for the whole song on ‘Cut my Lip’ and ‘Leave the City.’ It’s definitely a contrast. It feels a little weird because, live, I’m used to hitting a drum that’s tuned with a higher pitch and has more tension on it. The ballad snare is a lot looser. But it adds lower-end and feel in your chest for those moments in those songs.” 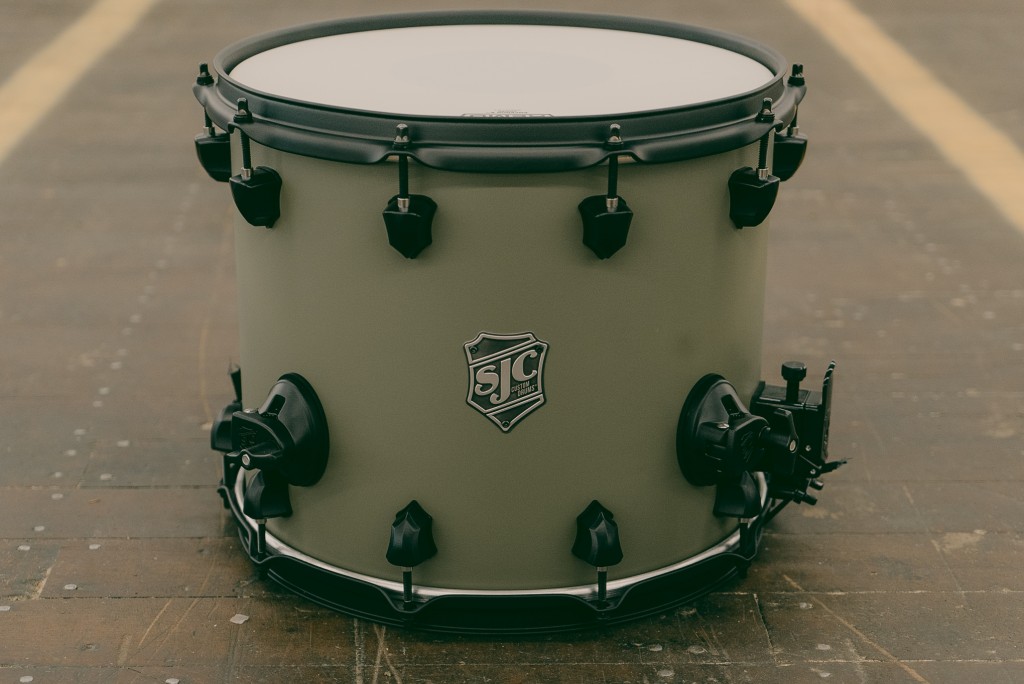 His other new toy, the SJC UFO Gong Drum with 4×20″ dimensions, has a (Remo) kick drum head and a kick drum mic placed underneath to pick up low-end tones. Used for texture, Dun plays the UFO with a kick and snare or kick and floor tom—never by itself. The sound it makes reminds him of an acoustic 808, (though he still uses his electronic drums to provide the electronic 808 drops).

Dun says that SJC has been great about providing backlines around the world, but with the new tour, a little extra time was needed to design the new kit. The Bandito Kit is ultimately a reflection of TØP’s dystopian world known as Dema. In coordination with the theme, the camouflaged drum shells are accentuated with leaves, shriveled rose petals, and lost vulture feathers. As it turns out, printing inside acrylic shells is quite challenging.

When the duo was ready to shoot their Trench video trilogy by director Andrew Donoho, these printing difficulties delayed the final kit from being ready to ship overseas. (Furthermore, sourcing a drum kit, cymbals and hardware isn’t an easy feat in the Ukraine.) But being the thrifty person he is, Dun packed and checked his own personal, 10-piece, flat, black, maple SJC kit through airport security.

“Kind of a funny story,” Dun begins. “I pack everything up and I [had been] told an incorrect weight limit. The hardware bag was too heavy, so they told me I either couldn’t bring the bag or had to find a way to make it lighter. So, I sprinted down to the international terminal at the airport and bought another suitcase and went back and divided up the hardware.”

To symbolize the Trench era, Josh and video team mocked up the drumhead using gaff tape. That SJC Kit with the video’s drumhead can be seen on the limited-edition Trench 10″ EP vinyl bundle.

Ciprari admires Dun’s commitment. “He’s a class act. I don’t know any other drummer—at that level—who would do that,” he says. “Most drummers would say, ‘You get it there for me or you don’t. I’ll use whatever the video team gets me for backline and I’ll tape over the other company’s logo,’ which is totally cool and normal, but just shows how Josh goes the extra mile.”

Dun shrugs, “It really wasn’t that big of a deal. When I was young and learning how to play drums, I gigged all over town, almost every day and my mom…” Dun pauses for a moment to deliver a smile heard over the phone before continuing. “She’s a champ. She took me around everywhere. Me and my mom. So, it wasn’t anything. It wasn’t anything.”

When it came time for SJC to design the bass head on the official Bandito Kit for the tour, Ciprari and SJC’s design team referred to the music video. Ciprari says, “We were originally going to print the design, but when I saw the video, I wanted to recreate it using the actual gaff tape like Josh’s video production team did. So, Josh and I teamed up, and we actually put yellow gaff tape and airbrushed the logos on the heads. Came out super cool!”

In a way, Josh Dun’s name is a sub-brand of SJC Drums. His one-and-only Spooky Kit, as well as the black drip kit he played at the MTV Video Music Awards in 2015, are on display at SJC’s museum for fans to view. Limited-edition pieces are also made available for sale to the public. Ciprari estimates shipping about a pallet a week of the various “Crowd” snares.

Meanwhile, the Bandito Kit (maple/mahogany) is available for pre-order and will start shipping later this month. Pre-orders are being offered through dealers and are reportedly almost sold out. Although some items might not be for the fiscally conservative, SJC also sells affordable and collectible Josh Dun practice pads.

This article was originally published on Reverb.com (May 2019)