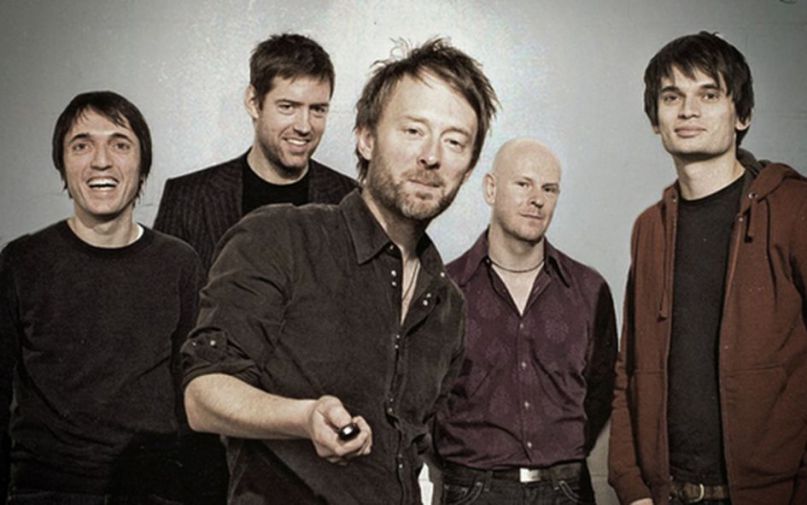 My Dysfunctional Relationship with Radiohead

In the early to mid-90s, drones of Radiohead fans packed venues demanding to hear the song, “Creep.”  During the anthemic chorus, the crowd sang in unison, “What the hell am I doing here? I don’t belong here. I don’t belong here.” Yet with paid ticket stubs firmly pressed into back pockets and a communal sense of isolation, it was as if everyone there actually did belong.   As concertgoers exited the venue, some were wearing buttons that had been distributed at the show.  One button read “I’m a creep,” the other:  “I’m so fucking special.”  Essentially, whoever wore the buttons apparently didn’t “get” the intentional irony.  This retrospective scene is an example of what I love but also distrust about Radiohead: Although they’ve offered decades of ground-breaking music that speaks to my soul, sometimes their approach can be interpreted as accusatory if not insulting.

It’s “Them” Not Me
Whenever I circle that city block of life and I stumble over the same mistake I make again and again (…and again), I involuntarily sing the chorus to “Just” in my head: “You do it to yourself, you do. That’s why it really hurts.”  It was fun to watch a music video about people who aren’t self aware and (shrug) the times when I’m not as self aware as I should be.  But, what first drew me to Radiohead wasn’t “Creep” or “Just,” it was their 1998 documentary, Meeting People is Easy. The title suggests a lesson is learned by the band: One imagines the group of once-marginalized, geeky intellectuals suddenly have their magic wish come true as the attention they’ve been seeking their entire lives is suddenly thrust upon them tenfold.

But, in fact, the movie isn’t about them, it’s about the press.  A montage of media junkets reveal just how entitled and ill-prepared, interviewers can be. Some TV “journalists” are shown mispronouncing names while other veejays require an assistant to hold up title cards off camera as if they’re in danger of forgetting their lines (or facts).  The movie cleverly steers the public eye away from the band and onto the other performers: the media.  Essentially, Meeting People is Easy is a 90 min peek into the lives of the thriving English rock quintet as they put the global PR machine in its place.  The movie wasn’t just a display of attitude, it was a boundary setter and, for a good reason.

For decades, the public observed countless bands revel in the initial burst of fame only to be swallowed up and regurgitated by the media before disappearing completely.   But not Radiohead.  Instead of avoiding the press (like many punk bands), they confronted and seized it from the beginning.  The band’s ability to hold up disreputable reflections of reporters without casting overt aspersions was genius —  and a little bit intimidating too. When I became a music journalist four years later, I studied this movie with PhD precision.  I figured that as long as I avoided the mistakes in that film, I could be above it all.  Maybe even “qualified” to interview them.   But my fantasies were about to change.  Apparently, you can’t just appreciate skilled target shooting without eventually becoming the target.

I remember attaching myself to the harsh, threatening words of “Karma Police” and eventually singing from within the crowd, “This is what you get when you mess with us!” But as fans know, by the end of the song, someone calls the Karma Police Department on all of us and we plead insanity.  Few songs, when sung aloud, feel like they’re surreptitiously unearthing the unsavory characters that exist within all of us, such as: the judgmental isolationist in “You And Whose Army,” “Talk Show Host,” and “Karma Police; the grand illusionist in “Everything in its Right Place” and the ignorant conformist in “2 + 2 = 5.”  In other words, there’s a chance these songs are meant for us, the fans.

“You Have Not Been Paying Attention!”
Radiohead’s sixth studio album, Hail to the Thief, was released in 2003 when the world was boiling over with global events (notably, the U.S.-led War in Iraq).  At that time, most other socio-political bands in opposition to the war wrote songs against the U.S. government thereby separating “us” (the people) from “them” (the government). But not Radiohead. Although the album’s title seems obviously aimed at President George W. Bush, the general public was also called to the stand to testify. The lyrics on the first track, “2 + 2 = 5,” chastise: “It’s the devil’s way now/ There’s no way out/ You can scream, you can shout/ It is too late now/ Because you have not been paying attention!”

When I saw Radiohead live in 2003, I didn’t know what to do during that song. The entire crowd erupted and shook like small waves crashing into one another on the high seas while the band seemed absorbed in their own creation and performance. The audience sang as if we were collectively mad at someone else. But it seemed the blame was on us.  We had not been paying attention otherwise, the war wouldn’t have happened.  But the accusation wasn’t nearly as mind boggling as the circumstances.  Singing “2 + 2 = 5” in concert is like going to church on Palm Sunday to mourn the death of Jesus but instead being handed a script and told to play the role of the Crowd and recite, “Crucify him!  Crucify him!” obediently.  Of course, we know participation is a matter of choice and Radiohead’s not forcing anyone to sing along. But I still feel kinda hazed.  I go to shows to connect with the band, their music and the collective vibe (and they do put on an awesome show!). But then there are those moments during the concert when I get bamboozled into participating in something else.

Then again, I might be wrong. Maybe they’re not blaming fans.  I mean, there are legitimately ignorant people out there.  Also, these guys put on a great show for audiences all around the world which means they can’t despise us that much.  They’re just messing with us, right?  And as far as my fan-based point of view, there’s plenty of evidence that I’m not speaking on behalf of most Radiohead fans in America. Hail to the Thief topped the U.S. charts at #3 while their next LP, In Rainbows, peaked at #1 and The King of Limbs at #3. They’re still my second favorite band of all time. I’ve bought all of their albums at fair price even when they were willing to give downloads away for free. But, they’re doing that accusatory thing again.

Who’s the Witch?
“Burn the Witch” is yet another brilliant and theatrical Radiohead song that tantalizes listeners with subtle finger pointing commentary. With the music video firmly tethered to the song, audiences (or, maybe just I) can try to decipher who exactly Radiohead believes are the witch burners. At the end of the Wicker Man-inspired video, the mayor arrogantly turns to the townspeople with arms spread open as if to utter, “Look, I did it. Just what you wanted.” That is, until the orchestra starts to attack the strings with the back of the bows. The townspeople turn to face the person watching the video, waving cheerfully as if to say: We’re watching you, paranoid android.

“I’m Not Really That Different”
There’s a scene in Monty Python’s satirical movie, Life of Brian, in which Brian, (Jesus Christ’s neighbor, born on the same day as Jesus) is mistaken by the townspeople for being the Messiah. In one scene, Brian feverishly attempts to discourage the crowd from obeying his words and commands. As if speaking to a bunch of amnesiacs who have forgotten how to live their own life, Brian pleads, “You don’t need to follow me! You don’t need to follow anyone! You’ve got to think for yourselves! You’re all individuals! You are all different!”  Hilariously, the townspeople (ignorant of their ignorance) parrot back in unison, “Yes, we’re all individuals! Yes, we are all different!”

At times, the crowd at any given music festival probably resembles that scene from Life of Brian.  We must look like a bunch of followers just singing and swooning in unison.  And yet, without us (the audience), there’s no art because, basically, the relationship between a band and its fans is a symbiotic one.  Both organisms (the band and the audience) need one another.  The band needs fans to receive their message (even if we’re not ready to handle that message) and the fans need the band to feel connected and understood.  But, for Radiohead, sometimes it must feel as if the crowd (or, humanity) can be a parasite.  And let’s just say it’s hard to be “in a relationship” with a band when you think they see you in this way.

So, when Radiohead comes to Chicago this July for Lollapalooza, I have this exhilarating but strange feeling like I’m reconnecting with an estranged lover.  I adore them for characterizing what it feels like to be different but also dislike for assuming I’m not like them. I don’t fully trust them but dammit if I don’t love them for understanding what churns in my sardonic gut (because maybe it churns in their gut too): A never-ending desire to truly belong with those who “get it.”

To join in the music discussion, look for us on Facebook at:  Music Makes You Think.