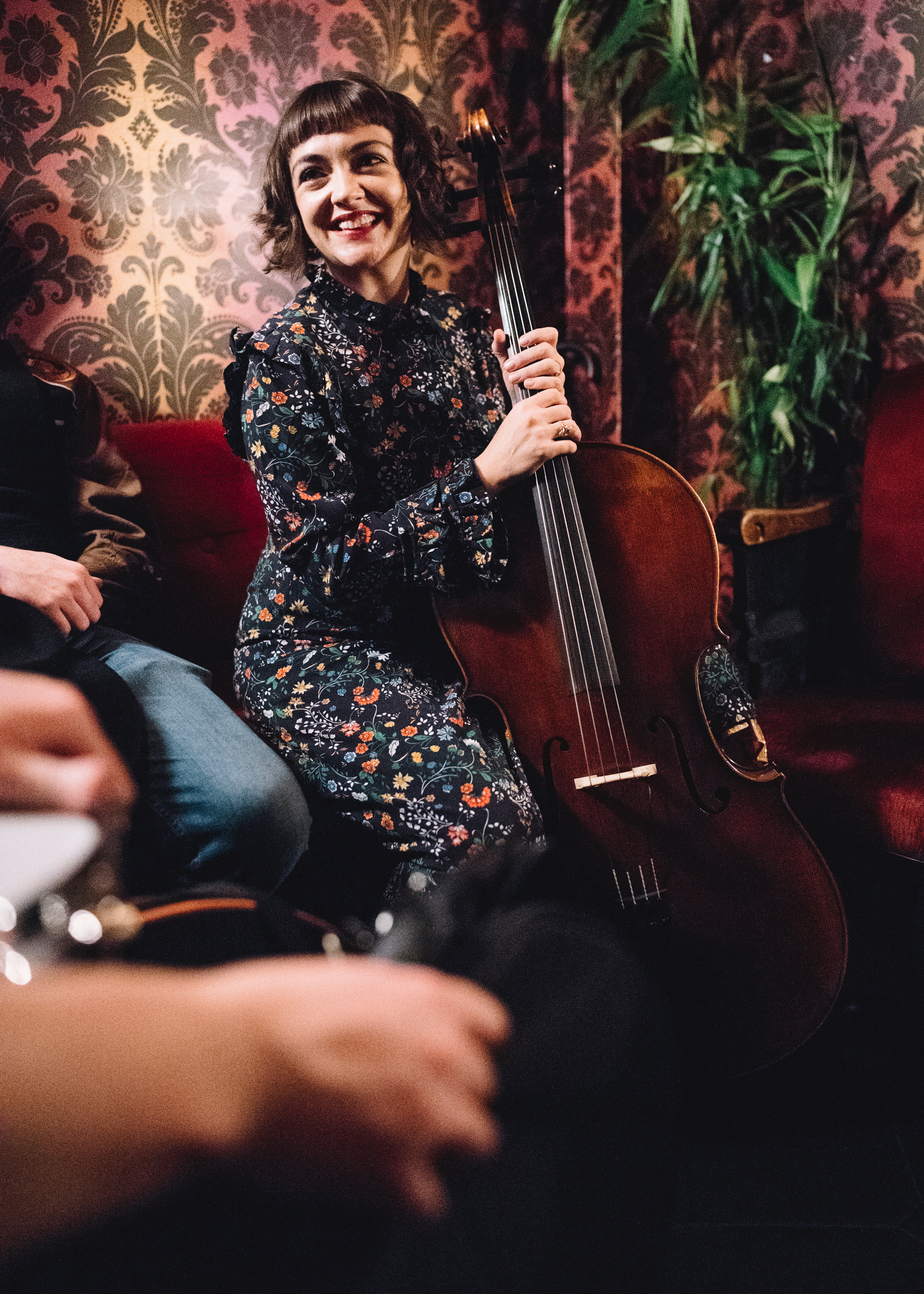 Neyla Pekarek, Cellist of The Lumineers, Steps Out on Her Own with “Rattlesnake”

When the founders of The Lumineers posted a want-ad for a cellist on Craig’s List, they immediately differentiated themselves. Not long after Neyla Pekarek answered that ad, she joined one of the most popular folk-rock bands in the world. During the early days, as a trio, Pekarek also played the mandolin, bass guitar and piano. But as a side player, her contributions continue to serve as a decoration for guitar and vocals, consistent with the band’s minimalist theme. Now, as she records her debut solo album, Rattlesnake, she’s finally empowered to define the roles of each instrument, including the cello.

Pekarek meets me at a neighborhood coffee shop. It’s a cold, wintery morning as we secure two stools in the corner. We set our ceramic coffee cups down onto the sturdy, wooden bar. I set up the discreet digital recorder as baristas take notice. Pekarek’s hair style reminds me of a flapper girl out of The Great Gatsby which is consistent with her concept album that also takes place during the mid-1920’s. She’s poised and charmingly energetic; a fusion of a determined, outgoing theater performer and an aiming-to-please, isolative cellist.

“We’re a bit odd,” Pekarek giggles about the stereotypes of orchestra players. “Before The Lumineers, I taught orchestra to middle school students. They tend to be more serious and introverted than band and choir students. At the professional level, orchestral players practice eight hours a day in solitude. So that private personality is kind of a must.”

When questioned about her extroverted side, Pekarek light-heartedly credits the four-year sabbatical she took from playing cello in college. Instead of joining the school’s orchestra, she went into theater to learn how to play lead roles and project her voice. Also during that time, she visited a local museum and came across the subject for what would eventually become her first album. 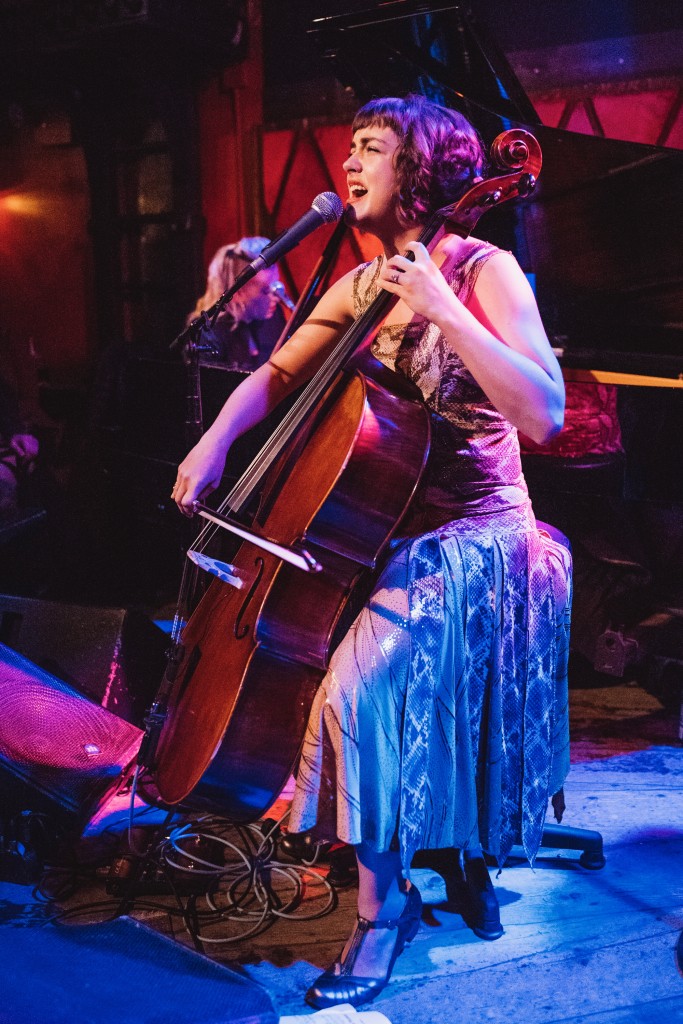 Rattlesnake, is based on a true story about a pioneer woman from Colorado during the mid to late 1920s. With her shotgun, horse and toddler in tow, the single mother is confronted by a rattlesnake migration. Unable to run away, “Rattlesnake Kate” proceeds to shoot at the slither of snakes. Once out of ammunition, she extracts a “No Hunting” sign from the ground and clobbers the rest. By the end of the massacre, Kate counts the entire knot (140 of them dead), proceeds to sling the carcasses over the back of her horse, rides home with her son and eventually turns the skins into a dress.

“Yeah, she is. I mean, she owned a gun. She rode a horse. She was what most people would call a ‘tomboy.’ And, I guess, in a similar way, the cello attracts a certain kind of girl,” Pekarek begins to pantomime her next thoughts. “It isn’t a delicate instrument. It’s not like a violin or a flute. You kinda have to get into it. You have to posture yourself around it and be okay with how you look. And you have to be able to carry it.”

“Is that what drew you to Rattlesnake Kate? Her ability to be okay with being different?”

“Yeah but I think it was more about her loneliness.” Pekarek adds, “She was married six times, divorced six times and she adopted a son — so she was probably infertile. Society shunned her. She felt pretty unheard and a little bit invisible by a lot of people.”

I know she’s talking about this historical character but I also get the sense that with that last sentence, she’s referring to aspects of herself. The baristas curiously linger around us, attending to clean mugs. Meanwhile, Pekarek’s eyes scan the ceiling as she begins to talk about the traditional role of her primary instrument.

She smiles modestly, “As a cellist, I’ve learned that it’s not always about you because the cello’s mostly a supportive instrument. It rarely carries a song’s melody.”

“Well, unlike a guitar, the cello’s fretless. The melody of most songs is written using chords. So, with a cello, you’re basically limited to composing with single notes. Now, I could loop different sounds but I haven’t done that yet. Because it’s the instrument that sounds most like the human voice, I actually like harmonizing with it – as if there’s another person in the room with me while I’m songwriting.” She laughs, “I guess it’s what happens when you’re alone in a hotel room in Paris with a cello and an iPhone and trying to get a demo down.”Pekarek says some of her cello-composed songs are staying in tact for the album. Yet, as most songwriters know, embellishments and sacrifices are made during production. Even though this cellist is at the helm on this album, Pekarek is approaching the process scientifically rather than emotionally.

“In the studio, it’s a little bit of a puzzle. You need a little bit of high-end and a little bit of low-end and some filler in the middle that might be on the cello or piano. It almost becomes mathematical, like ‘Something’s occupying that space, sonically. That trumpet part is beautiful but it’s stepping on something else.’ That thought process takes the ego out of it. It’s not about the player or the instrument, it’s about what serves the song. The same thing happens on stage.”

After years of traveling the globe with The Lumineers, Pekarek has met a lot of musicians. But when forming her own live band, she’s recruited musicians who understand the nuances of playing with “non-traditional,” stringed instruments.

Josh Skelton is lead guitarist (electric, lap and pedal steel) for the upcoming tour. To accommodate the songs and cello, he plans on bringing a Carvin AS-50 (circa 1969), a Mullen D10 Royal Precision pedal steel guitar, Les Paul, two heavily-modded guitars (courtesy of Mike Patton at Eclipse Guitars in Arvada, Colorado) and a Danelectro.

From his parked car somewhere outside of Denver, Skelton explains to me how he has to position his guitars around stringed instruments.

“I find that my guitar takes on a very different role than it usually occupies,” he smiles broadly. “I once played in a band with a violinist. The violin sits in the high-pitched, ‘rock star’ range while my guitar sits in the rhythm area. So, with that band, I wasn’t in the violinist’s hair. But Neyla and I both offer low-end resonance and sustain. Playing with a cello and keyboardist changes the tonal landscape in my ‘sonic neighborhood.’ So, basically, between the three of us, we’re sharing the same range especially during verses. I just have to be aware that we’re in each other’s backyard. Also, the cello is usually played monophonically. So as the guitarist, I have to be thinner with my tones. I won’t be pushing the front end of the amp with a hot signal to get a thicker, more compressed sound. In that way, it’s a matter of orchestration rather than instrumentation.”

Back at the coffee shop, I find myself asking Pekarek a blunt question before averting my gaze into this diminishing cup of coffee. “Do you ever get the sense that your band is holding back on their own musical capabilities?”

“Oh yeah,” she nods without hesitation, immediately recognizing the coincidence — if not the irony – that she’s been engaging in role-reversal. “So, for example, I know our drummer [Blake Watts] is scaling back a lot. He’s played in metal bands. I can hear during soundcheck how much he can offer. I turned to him, recently, during a rehearsal and was like, ‘You’re amazing!’ But because the album offers so much storytelling we all have to honor the lyrics. Fortunately, I have bandmates that really get that. They’re all professionals and they don’t display a lot of ego.”

Pekarek knows it’s not entirely unique to be recording and touring with a cello. She cites Jack White who’s worked with a bass clarinet player. And Sufjan Stevens, who studied the English horn and oboe, is known for multi-tracking himself playing: a Wurlitzer, xylophone, vibraphone, glockenspiel, alto saxophone as well as a Baldwin electric church organ (just to name a few). In fact, “non-traditional rock instruments” has become an oxymoron. Any music journalist who attempts to suggest otherwise is being rather passé. That is, unless she were to uncover a way instruments, like the cello, are making their way into something outside of the music industry.

Pekarek’s cello is sitting alone in a hotel room, not far from where we’re wrapping up. As we put on our heavy coats, we banter about what we’re each doing later. She invites me to see her perform with comedian and YouTuber, Chris Fleming. He’s got a show tonight and she’s going to play the cello during his routine. Once again, she’ll be in a supportive role but she doesn’t mind. Even as a side player, she realizes she’s ultimately serving the art.

This article originally appeared in Reverb in 2018.  Since then, Pekarek announced she was leaving The Lumineers and kicked off her “Rattlesnake” Tour in early 2019.

All photos from AK Photography.