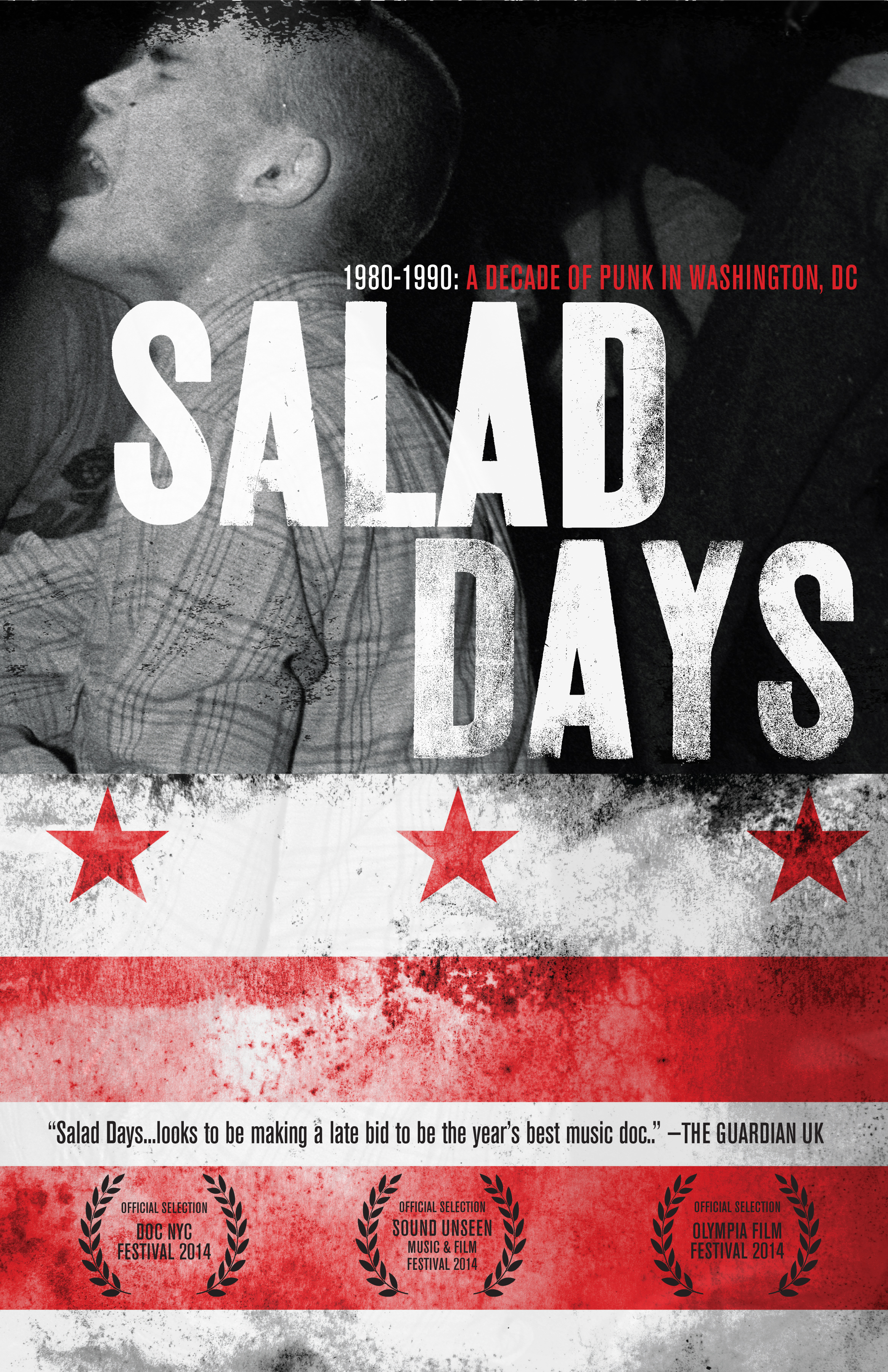 Music in Movies
by Julie Simmons
2 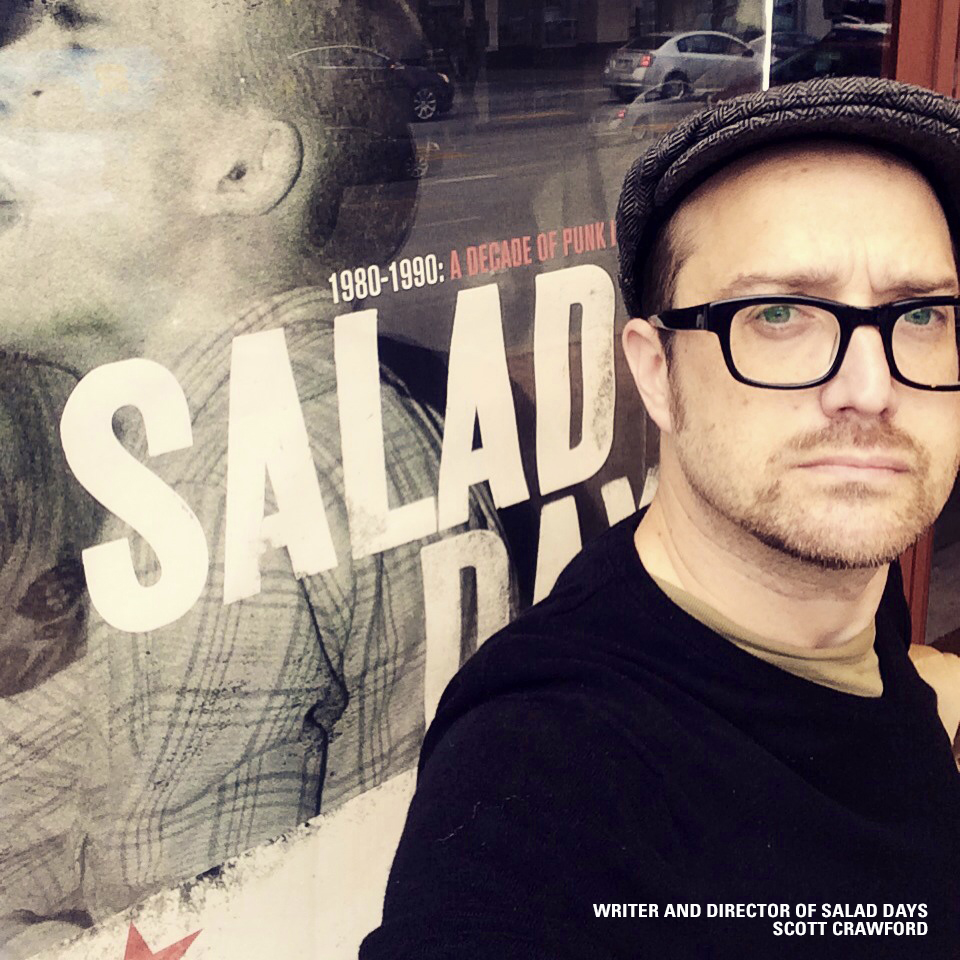 An archived video shows a wide-eyed boy crouched down.  He’s sandwiched between young males in the front row of a small venue.  Dressed like a prep with slightly feathered hair, he appears mesmerized by the band. The pre-teen, suppresses a Chesire grin.  With a touch of self-consciousness, he giggles, “Yeah, it was excellent…It was great.”  Almost 30 years later, the boy in the video, Scott Crawford, has revisited his youth to write and direct the acclaimed documentary, Salad Days:  A Decade of Punk in Washington D.C. (1980-1990).  Offering keen insights into the punk mentality, the film is a personal invitation to a world within the nation’s buttoned-down capital.

Like most documentarians, Crawford has a sincere appreciation for the subject matter. He’s lived just outside of D.C. his entire life and admits that he was and still is a fan of punk music.  Salad Days could’ve been a retrospective piece as told by insiders.  Instead, it’s a well told story infused with Crawford’s subtle observations and intuitions. During a phone interview, Crawford recalls the first time he was exposed to the music that changed his life.

“I think I was listening to the Dead Kennedys one day when my friend’s sister sat me down and said, ‘Look, if you want to listen to really good punk music, here’s what you need to listen to.’ And she played me [the album] Out of Step by Minor Threat in her bedroom.  And, you know, I must’ve been really wide-eyed,” he laughs at the thought of his first exposure.  “And I basically said [to myself], ‘Well, this is it.  This [music] is it for life.  These are my people.’  I don’t know how I knew that at age 12 because I was terrified. I didn’t know anyone.  I was surrounded by what I thought were these huge, hulking dudes going nuts.  It felt dangerous. But somehow I felt like I belonged.  They sort of took me in as their little brother and became my family in a lot of ways.”

J. Robbins (Government Issue, Jawbox) echoes Crawford’s early epiphany. In the film he articulates, “I mean it’s weird to me when people talk about punk rock in this kind of evangelical terms – like it saved their life or changed their life – because it’s not very punk to talk about it in those ways. But, it’s unequivocally true…there’re times when I think like, ‘Wow, I didn’t even know how to talk to people.’”

Once bitten by punk and sensing that something big was happening, the 12-year-old Crawford published his own fanzine called Metrozine.  He started by interviewing his local rock heroes and inserting photos generously donated by local photographer, Jim Saah.   Metrozine became known and respected which allowed him even more access to the scene.

Crawford recollects with mixed emotions, “A lot of the people in the film ended up becoming my friends.  So, I would be sitting around at band practices and I would hear these conversations.  And I don’t want to be specific but I was getting multiple viewpoints of what was going on.  There were things I saw as a kid.  Not everything was great. What I really wanted to show in the film was that as inspiring as this community was, it was also dysfunctional.”

It’s not shocking to imagine the dysfunction within the D.C. punk community.  The scene emerged out of the city’s mistreatment of this group of punks.  A shrug is almost audible over the phone as Crawford ponders, “Thirty-five years later, I’m not sure how you have to dress to have someone pull over and kick your ass.  In LA or New York City, people are used to a certain level of ‘weirdos’ walking around.  But D.C. wasn’t tolerant.  It’s still a very small town.  And, you’re dealing with Georgetown, a very expensive private school.  And you’ve got the Pentagon and naval base so there are a lot of military types and jocks and preps.  It was not a very good combination.”

Or, perhaps it was.

If it wasn’t for the motley brew of small but powerful egocentric forces, the music most likely would not have emerged and evolved the way it did.  Regardless of how the hard core scene was conceived, it wasn’t long before it took off.  Throughout the film, Salad Days treats the audience to all the trappings of a great music documentary: rare video footage of legendary punk bands (Minor Threat, Beefeater, Government Issue and loads more).  The videos are interspersed with a wide breadth of interviews offering fascinating subplots that unfold chronologically.  Meanwhile, deep-cuts play beneath Saah’s photos of singers chuffing lyrics like a locomotive as testosterone-fueled guys get carried away into a rippling, agitated crowd.

Then Salad Days does something a little unexpected.

Mark Sullivan (Kingface) confesses, “And, we’re not fighters. We [were] the sensitive boys putting on this armor.” It’s a minuscule part of the film that doesn’t get belabored but it suggests that something deeper was going on within the predominantly male mindset. (Maybe it still does in punk music today).  Just as demonic-looking gargoyles were once carved into the tops of buildings to ward off evil, the punk image seems to serve similar protection from a scary outside world. 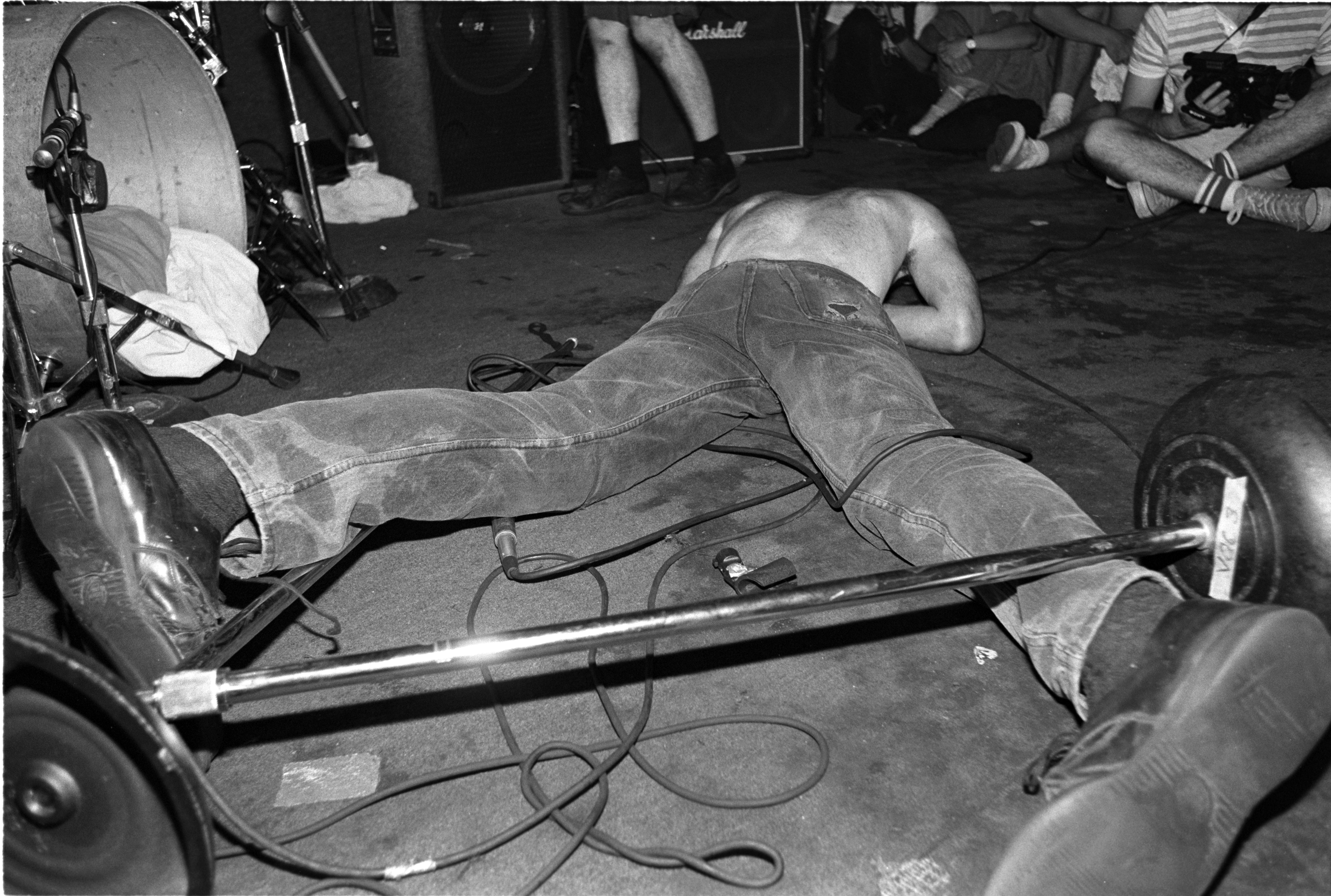 “That, to me, was something you don’t see in a lot of punk documentaries.” Crawford explains.  “Other punk documentaries tend to focus on the nihilistic stuff and the macho aspect.  That really wasn’t my reality. I think one thing you’ll see is that a lot of people felt left out. These were caring guys.  I wanted to show that that existed — that vulnerability.”

The movie skillfully layers authentic punk imagery with these pause-worthy insights.  In many cases, social stigmas evolved the movement.  For instance when under-aged, eager concert-goers (like Crawford) were getting turned down by local clubs, the D.C. music community spearheaded “all ages shows, ” the first city to do so. Female punk bands formed in response to an overload of all-male bands.  In fact, the ebb and flow of isolation to inclusion back to isolation can make the viewer hungry for a Ken Burns-length documentary.  But this movie is about the punk movement.  Pacing is important.  So, it moves.  Still, there’s enough depth that by the end of the film, you feel like you re-experienced a memory you never actually had.  Maybe that’s why this strangely intimate film about punk music has been garnering so much media and industry attention.

“And, we’re not fighters. We [were] the sensitive boys putting on this armor.”

Salad Days was awarded the 2015 Audience Award at Noise Pop and Best Overall at the Asbury Park Film Festival.  NME also named it one of “12 Music Documentaries To Get Excited About In 2015.” The DVD has been released.  And so far, it’s ranked #9 on Billboard’s Music Video Sales chart.  With a companion book coming out in February 2017 and a title like Salad Days:  A Decade of Punk in Washington D.C. (1980-1990), the whole package can feel like required reading and supplies for an elective college course.  Yet, there’s an even better reason for watching a film that attempts to get at the psychology of punk music:

We’re all born strangers into this world.  After about 12 years of being trained by guardians and teachers on how to “fit into” society, you either find a way to conform…or you don’t.  For those who don’t or can’t fit in, darkness, repression, denial and isolation can take its grip.  And when mainstream outlets fail to provide relief from the deep energy (often anger) felt in the guts of isolated youth, music can be a temporary answer to the darkness. Punk is just one of the dialects for frustrated youths.  Moreover, listening to hard-core can act like a drill that taps into an even deeper well of subconscious rage. In this way, self hatred and violent outbursts can be redirected into finger-pointing lyrics and guttural screams.  Banging your head so hard it feels cathartic can be a surprisingly healthy alternative. The music, specifically punk music, can feel like it’s just for you and at the same time like it’s for “your people,” your new family.  And once you’re “in,” the scene becomes, well, fun.  But as this movie proves, even something as powerful as punk music can’t entirely abolish isolation and segregation.

If there’s a good reason to watch Salad Days, it’s to connect with the fact that punk is here to stay.  A scene might have ended in Washington D.C. around 1990 but punk is still very much alive in America and around the world.  And, who knows, maybe there’s a 12-year-old (or even a 50-year-old) who will watch this movie and get wide–eyed at seeing and hearing Bad Brains, Fugazi, Faith, Fire Party or Chalk Circle.  For someone out there, this movie could mark the beginning of the rest of their lives.  And just maybe, they won’t feel so alone in this world.