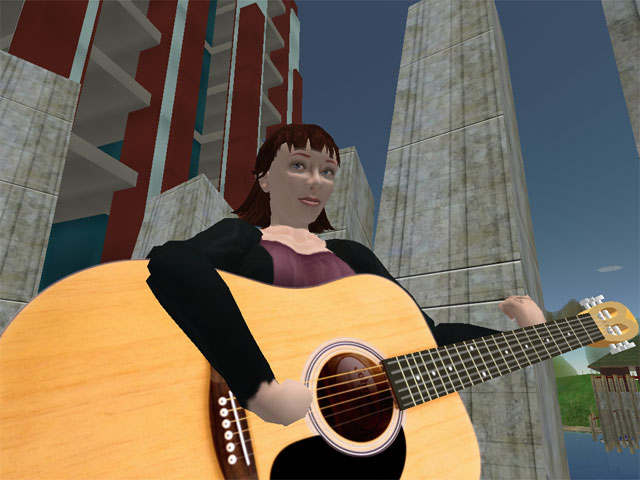 From the Archives, Music Industry
by Julie Simmons
0

This article was originally published in Harp magazine in June 2007

When Albert Einstein theorized about parallel universes, he probably didn’t think that a few cyberpunk geeks could actually invent them. As virtual communities like Second Life continue to populate the Internet, a new medium for performing live music is emerging. Recently, Suzanne Vega became the world’s first major recording artist to host a virtual concert before a live audience comprised entirely of computer-generated characters. Virtual concerts might be cost effective and innovative but are they better than the real thing?

While many can barely manage their own busy lives, there are millions of people who are vicariously experiencing life as a self-made, alter ego in the virtual world. For those who haven’t heard, one of the most bantered about virtual communities is a web site called Second Life. Unlike the Sims (or SimCity) SL is not a game; it’s as much a psychological playground as it is an open market society for more than 2.8 million “residents”. According to Fortune Magazine, approximately $600,000 is exchanged daily on SL. In addition to gambling, anything from virtual real estate to clothing can be bought and sold using the in-world currency, the Linden dollar, and later be exchanged for real world currency. That’s right — you can invest a portion of your real life paycheck to buy a pair of jeans for your digital self that your actual buttocks will never fill. Of course, that’s just the economic side. Virtual communities like SL are also about searching for unique experiences like flying or attending a live music concert.

Bill Lichtenstein, President of LC Media, was among the first to recognize the potential for broadcasting in the virtual world and was responsible for organizing and airing the Vega show online. Within a brief time period, he has uncovered a few key social applications for the virtual concert and namely the opportunity for content creation. Aside from offering a unique experience, SL members can record and edit the show from their perspective and post it for others to view on free share sites like YouTube. Consider it a crude offshoot of the music video. Lichtenstein recounts, “Once music videos came along, you could no longer hear a song and not integrate the images of the music video into your memory of that song. It became inextricably connected to that song. I think Second Life has that same possibility to create experiences that will then pair up with songs.” And so it has.

At the 2006 SecondLife Community Convention in San Francisco, inventor of Lotus 3-2-1, Mitch Kapor passionately articulates in his keynote speech, “I had an unexpected spiritual experience two days ago. I was watching on YouTube, a concert  [in Second Life]. What I’m seeing is her avatar, she’s playing guitar and there’s a live performance going on, I’m hearing it on my headphones because the audio is being streamed, but I’m watching a director cutting between multiple camera angles of a live concert…I’m watching a kind of television broadcast of an event that is simultaneously real and virtual. And all of a sudden my sense of what was real expanded a million-fold. A fundamental shift of my awareness happened. Where this is going is toward the full interpenetration of the terrestrial reality made up out of atoms, and virtual realities made up out of bits. It’s not a separate thing, it’s not a cartoon, it’s not a game, it’s a much, much, much, much unimaginably larger reality, and that is powerful.”

Consider it a pleasant coincidence that Suzanne Vega was among the first to test out this new and empowering performance medium. Vega has informally been dubbed “The Mother of the MP3” after the inventor used her 1987 hit song, “Tom’s Diner,” to fine-tune the quality of a song after it’s been compressed into a digital file. Of course, Vega wasn’t trying to represent another technological milestone, she was approached and happily agreed to this rather surreal experience. Vega’s initial response to the overall experience: “Very interesting!”

Suzanne Vega and I are not in the same room. In the spirit of embracing technology, we are conducting this interview via email. As I read her answers to my questions, I’m struggling to attach a stable mental image of her face. Different versions of the singer swing past my consciousness like the carousel at a dry cleaners.  At first, I envision her as the avatar then as the photo featured on her web site. I call up a fuzzy image of her from the late 80s as well as her concealed face on the cover of her LP, “Nine Objects of Desire.”  At last, I settle on the stark characters typed in her emails and ask her what she first noticed was the same or different about conducting a virtual show.

Vega writes descriptively, “There was some of the immediacy of a live show.  But, on the other hand, the only ones who saw me directly were the people in the room with me. The hardest parts of it were the technical aspects – how to walk, how to pick up the guitar so that it stuck to my body in the right way, and give the appearance of being life-like. The technical aspects were difficult but would probably get easier with time. The idea that people could hear me and my performance in real time and respond through the computer was fun.”

Still separated by the barriers of email, Vega quickly answers a question about the psychological impact of performing a virtual concert.  “There were psychological issues that arose that I was not expecting – my interviewer was in a wheelchair in reality and when there was a technical glitch that had his avatar standing up it seemed to make him very uncomfortable. Otherwise it’s like watching cartoons, a bit.”

When asked to describe the energy of a virtual audience, she types, “Real audiences are easier to read – maybe they are tired because they have been working all week or they are excited. You feel them and feel their energy. Not that the virtual audience didn’t have energy — they did. But it’s different if you are lying on the floor of your bedroom, than if you’re a fan that’s been standing in line and now you are inside the theater. Nobody [in the Second Life concert] looked real, even the people I knew. I was the only one that looked anything like their real self. And in real life, you might be surprised at the demographic at an SV show – it changes all the time.”

Having watched the YouTube video of the performance, I commented on the particularly bizarre avatars that were watching her show. I wrote, “There some metal-heads and some goth chicks as well as looking types.  All things considered, would you say that it was successful?”

Vega agreed, “A virtual concert has more dimensions than just tuning into a radio station. Also the interactive factor works well.  If you see a performer on TV, you can’t really shout out to them but in this medium the performer can read what you are typing out there.”

Simmons-Trapp:  Did it seem fair that you were trying to present yourself in the most honest way you could given the avatar you selected and by using your own voice and singing your own songs while audience could be anyone they wanted to be?

Vega:  If I was incognito, I could just chat with the audience in disguise and be more like one of them. So I guess the shyness I feel as a real person still exists within my avatar as well. Something to think about.”

Vega is certainly on the cutting edge when it comes to virtual performances but others are quickly following. Duran Duran has also hosted a live concert. Cover bands and other lesser known bands have submitted a live stream for other avatars to experience. Per the disclaimer, “U2inSL is a role-playing group which exists in support of the One Campaign but is not affiliated with the real U2 or Bono.”

Everyone says that the Internet is bringing us closer together.  For the most part, this is true. But when it comes to virtual concerts, I found myself more connected to the artist when I closed my eyes and concentrated on Vega’s voice as it poured out from the speakers. Funny, I thought that’s what radio and albums used to provide.

To watch Suzanne Vega perform “Tom’s Diner” in Second Life, check this out.