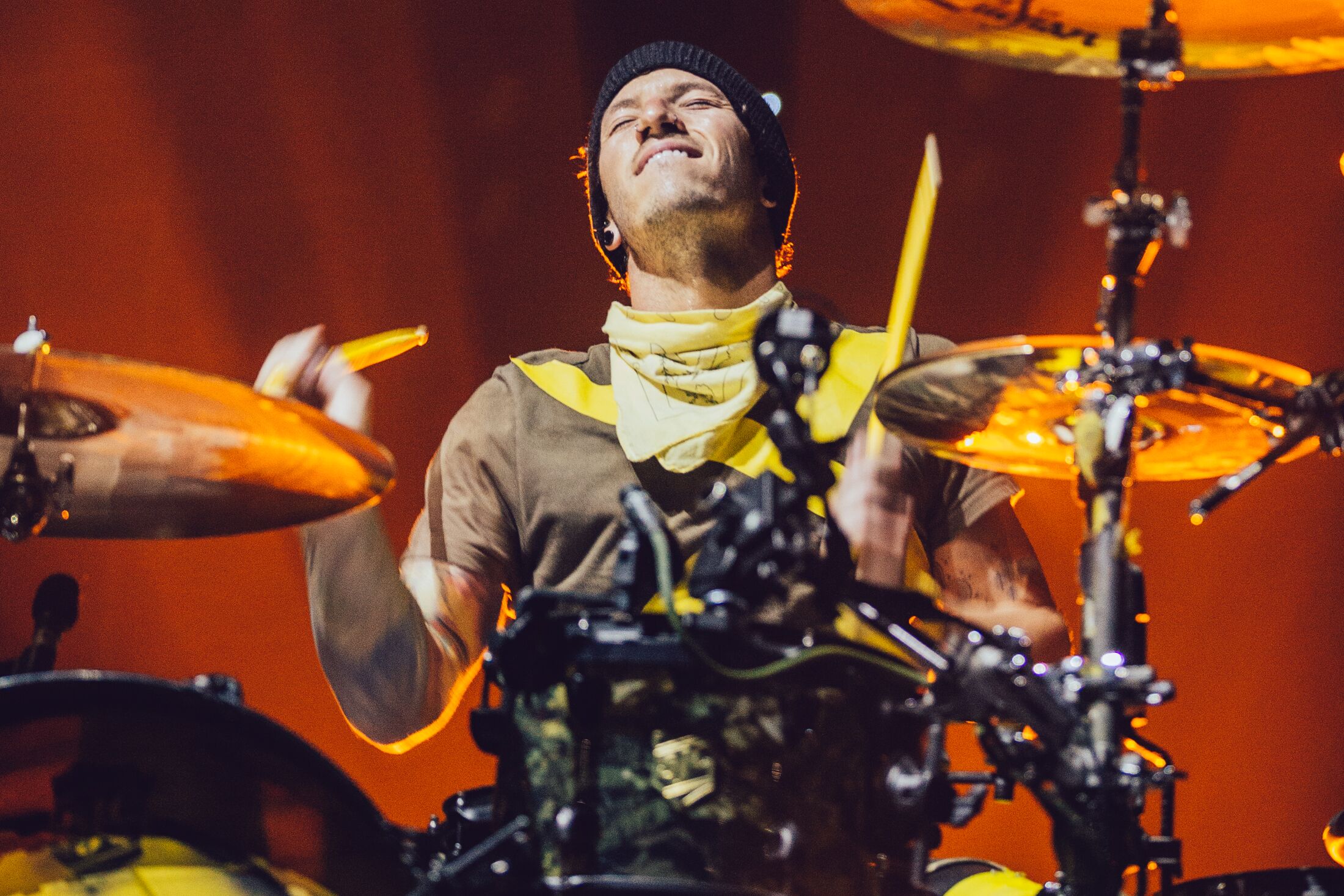 The Social Experimentations of twenty one pilots, Josh Dun

Just before the end of the song “Morph,” twenty one pilots’ drummer, Josh Dun, dismounts his throne, hops off the lip of the stage and hoists himself on top of a structure dutifully being steadied by fans. After taking a moment to absorb the crowd’s energy, he sits in front of an acrylic, two-piece SJC Custom drum kit that’s drilled into the wooden platform and completes the song. Within the same set, he struts across a long, steel bridge to play another kit on a B-stage. He challenges a projected, virtual image of himself to a drum-off…and wins. For the encore, he and bandmate, Tyler Joseph, use mallets to pound on bass drums brimmed with water as they christen joyful fans.

“I truly do look at my role in the band as keeping the beat and I never feel like I want to overstep what my role actually is. At the same time, I’m a performer on stage and there are times when the drums should be a highlight,” acknowledges Dun.

He continues, “Seeing what other bands [like MuteMath] have done to break down the wall between stage and audience helped me realize that there aren’t really any rules. Exploring and experimenting can be the fun part, a chance to spice it up.”

When TØP was just getting started in and around Columbus, there weren’t enough people in the room to hold up a drum kit. So instead, Dun and crew (aka his buddies) would perform a quick stage-to-floor set up during the interlude in the song, “Anathema.” 10 – 20 people would surround Dun in front of the stage while Joseph finished the song.

That’s how it started.

Eventually, as Dun recalls, he and Joseph were forced to ask themselves, “Can we even do this thing anymore because the crowds have gotten so large?” It was a nice problem to have. And as a result, an island was built.

The crowd kit that sits upon Drum Island is comprised of a simple kick, snare and crash; It’s a throwback to a drummer’s early days — minus a hi-hat. 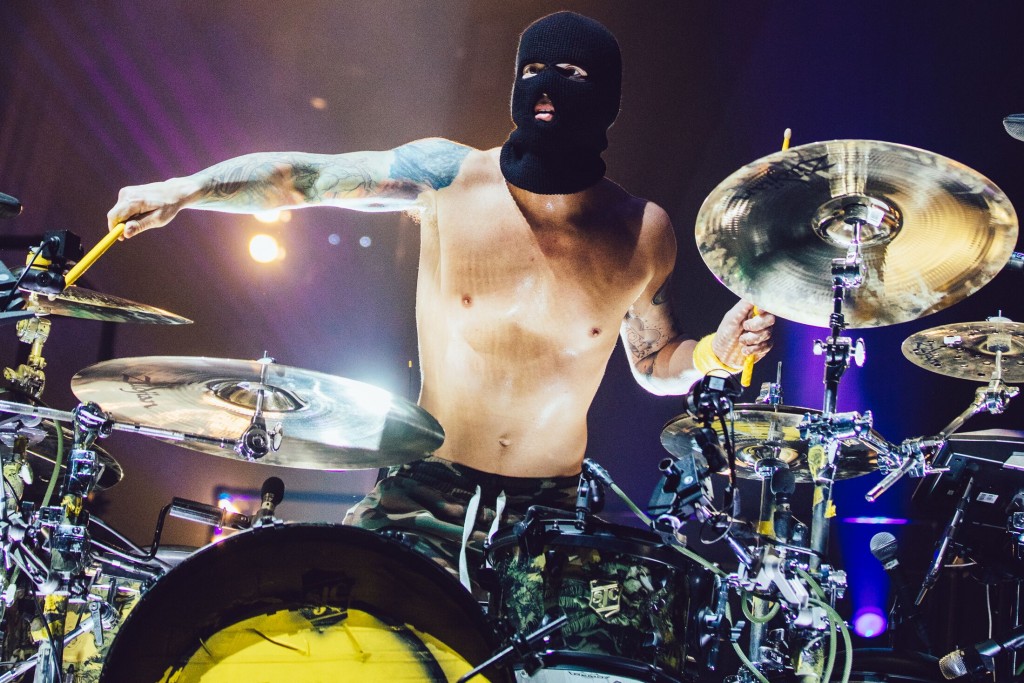 Dun recalls the first time experimenting with the concept, “We didn’t know if the crowd would hold it up, for how long or if they wanted to be part of it at all. As time goes on, it seems that people want to pull the board down and look over it. There’ve been some times where I’m questioning whether I’m going to be able to finish the song or not. But I think the element of pride and owning the fact that they helped the show happen overrides wanting to capture a moment for social media. I’ve learned that the crowd mentality is to feel responsible for the outcome of how a show goes. The first few rows of people are the ones I’m in tune with the whole show. It’s a partnership, really. There’s a responsibility on both ends.”

Drum Island hasn’t been the only social experiment. This past spring, Dun and Joseph conducted “The Quiet Game” to see how long an entire venue of concertgoers could stay completely and utterly silent. Attendees at 17 western and Eastern European shows were invited to participate. At the AccorHotels Arena in Paris, 20,000 fans set the current record for maintaining 5.21 seconds of silence. Fans wondered if “The Quiet Game” would become a new concert tradition. So far, the band has returned its focus to reconfiguring their set list.

The Bandito Tour launched in October 2018 in tandem with the official release of the band’s fifth studio album, Trench. Initially, only eight songs from Trench were performed live. Among those, “Morph” was reserved for the island performance while “Leave the City” seems expressly written to serve as the sentimental closer before the encore. Over the course of seven months, all 14 Trench tracks have now worked their way into the act. As a result, some classics have been sacrificed but even that’s an experiment Dun and Joseph continue to monitor. 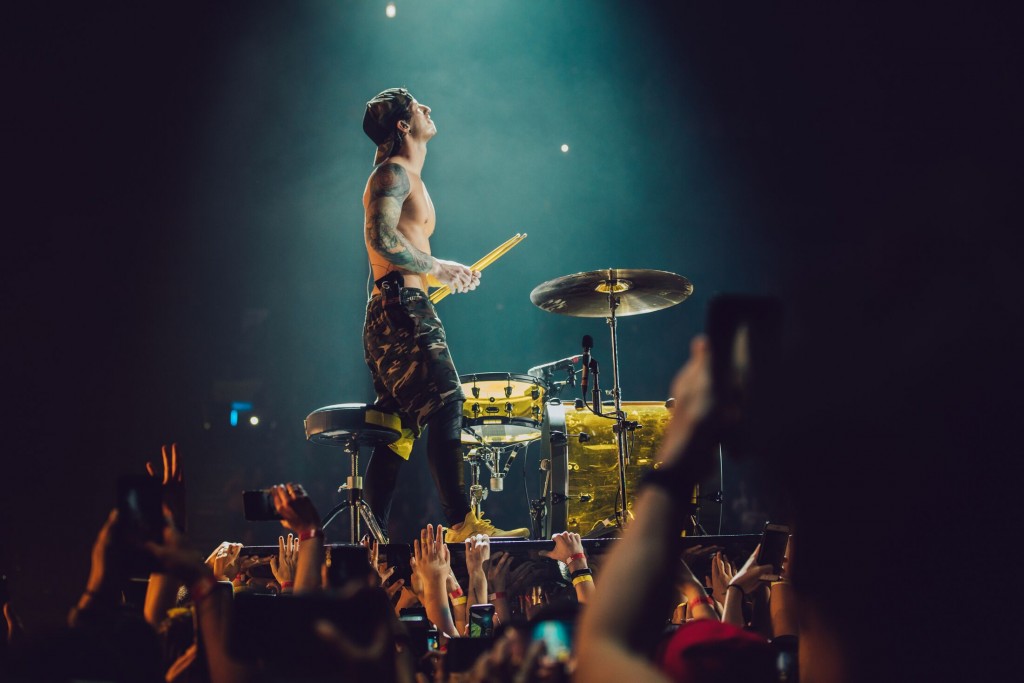 From the main stage, Dun is encaged by an array of Zildjian cymbals, Yamaha DTX electronic drum pads, and acrylic SJC Custom Drums. For The Bandito Tour, he added a 14×14” SJC Custom Drums ballad snare for a deeper contrast to his 10” Trench side snare as well as an SJC 4×20” UFO Gong Drum that sits beside a rack tom.

Yet what lies beneath the exoskeleton of hardware, cymbals and drums is where the magic happens during a TØP concert. At the start of many songs, Dun taps foot switches and pedals that trigger his Roland SPD-SX or Ableton Live 9 to release recognizeable loops. Playing off an Ableton isn’t novel but understanding the proper layering of electronic, pre-recorded samples and live performance requires skill.

Dun smiles, “I’m always trying to think about what’s the new thing that we’ve never seen before that could work. Keeping our minds on it and trying to outdo yourself is fun. There’s a lot of technology out there that can make drums move around but the special thing about Drum Island is that it requires people. I’d like to figure out how to push that a little more.”

At the very end of the concert, after the bass drums have been retrieved from the crowd and the final squares yellow confetti fall from rafters, Dun and Joseph meet at the end of the stage. They throw their arms around each other’s shoulders and take a bow. In a final attempt to remove the wall between stage and audience, they address their fans one last time declaring, “We are twenty one pilots, and so are you.”

This article was originally published in DRUM! magazine (August 2019).

All photos by Brad Heaton.