Editorial, Music With A Cause
by Julie Simmons
4

Recently, my 12-year-old daughter, Lyric, declared to a grown-up that I listen to music with “swear words.”

“Even the F-word!” She testified enthusiastically.

Sensing immediate judgment, Lyric proceeded to backtrack and articulated my philosophy: You should be able to express yourself fully through music. Well, actually, in her ‘tween mind she translated my belief into something more like this: Mom doesn’t actually swear around us, her music swears for her.

The grown-up gave me a lopsided grin.

She spoke the truth. I do listen to what used to be labeled on CDs as “explicit lyrics,” though now I’m hitting download with the privilege of a click. Privately. In my bedroom. Or, when I’m by myself in the car. But apparently, Lyric and her brother, Fletcher, have a way of hearing everything. They’ve figured out that I’m not in my room dutifully planning their next play date but instead, hoping to get one for myself.

But seriously, I can appreciate my kids’ confusion. It wasn’t long ago that we were falling asleep to Rockabye Baby! Lullaby Renditions of Radiohead and watching Biz Markie beatbox on Yo Gabba Gabba. I’ve been a music journalist since before my kids were born, so it was always possible that their little ears would be exposed to toxic phrases like secondhand smoke. But, for most of their younger years, they were aurally shielded. That is until more recently when I was forced to confront my past. And when I did, my playlists became noticeably harder to contain.

These days, after school drop-off, I roll up the driver’s side window of my 2009 Toyota Hylander. I wait for the glass to groan between the tight embrace of the rubber and the metal frame. Then I take a hit of my music. I turn up the volume so the vibrations from the car speakers sync with the vibrations in my body. Resonating with my current frequencies are: Against Me!, Watsky, K Flay, Anderson .Paak, Glass Animals and A Tribe Called Quest (Pfife’s there’s too). One song gets me worked up while another helps me come down. I’m pretty sure I’m diluting each artist’s cool image by playing their songs from my “mom car.” But, they don’t seem to mind.

Once a month I go to a concert, usually by myself. Sometimes I think that the younger, agitated crowd expects me to hand over credentials like the way most Americans want to see a presidential candidate’s tax returns. But, they don’t ask. The music community’s very accepting. Maybe it’s because hardcore music is about people toiling with their repressed emotions. For me, music has always been and continues to be my safe place for expressing passion and anger.

It’s not that I’m unassertive. I can be outspoken, especially when it comes to parenting. I can count to three before I warn my kids that I’m about to get mad. My problem is that I tend to let most things roll off me like water off the back of an oily-feathered duck. While this might seem very Zen, it’s more accurately an indication that I’m a serial forgiver. These days, I have to be strong. I need to flirt with someone else’s rage so I don’t come off as naïve. And I’ll do it by listening to punk, hip-hop and a little girl-power on repeat. With the exception of a few slurs, I sing every curse. But, as I do, my thoughts go back to the kids.

When Lyric tattled on me, I wondered what she needed. Should I bring the music out of my backrooms? Or, did I just need to explain what was going on in there? I felt like my daughter’s attempt to expose me (to a seemingly more responsible adult) was possibly a cry for clarity. So, I took her aside and let her to get curious about my music. She can handle it.

“What do you want to hear?” I asked, as if I was offering her the Crown Jewels. 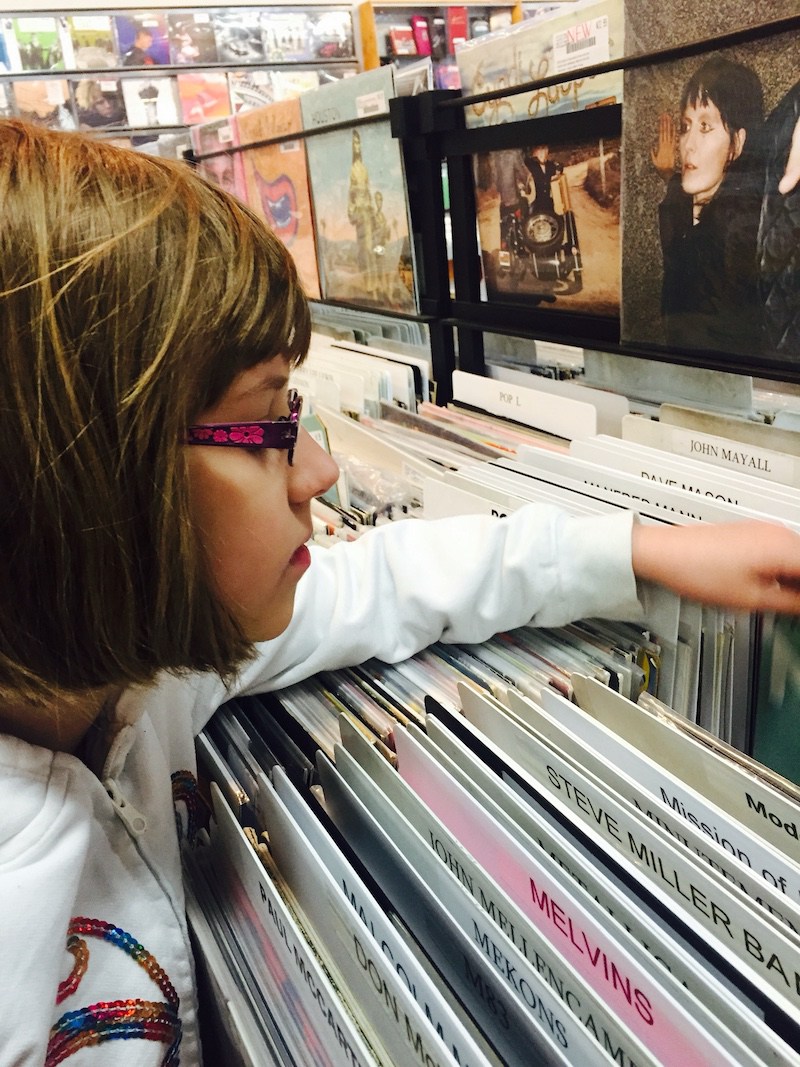 Together, we employed A Tribe Called Quest’s “We the People” as a learning tool for understanding the current social and political tensions in America. And we used twenty one pilots songs, like “Migraine,” to talk about depression and anxiety. In the end, by letting my music out, I let my daughter in.

Meanwhile, my son is still too young; he’s only eight-years-old. I tell him not to cuss because it’s awkward to hear a child struggle under the weight of an F-bomb. His time will come soon enough. But, for now, he continues to listen to non-explicit music. Yet in his highly segregated world of elementary school, where boys are often “versing” girls, Fletcher was drawn to a particular artist on my playlist and that became, as we say, a teachable moment.

A few years ago, the lead singer and guitarist for the punk band, Against Me!, Laura Jane Grace, transitioned into becoming the female she always felt she had been. One day, while doing research for a story pitch, Fletcher peered over my shoulder as I watched a video of her. Laura was doing an impressive mash-up song using Michael McDonald and The Cure. I could tell Fletcher was trying to process what he was watching. 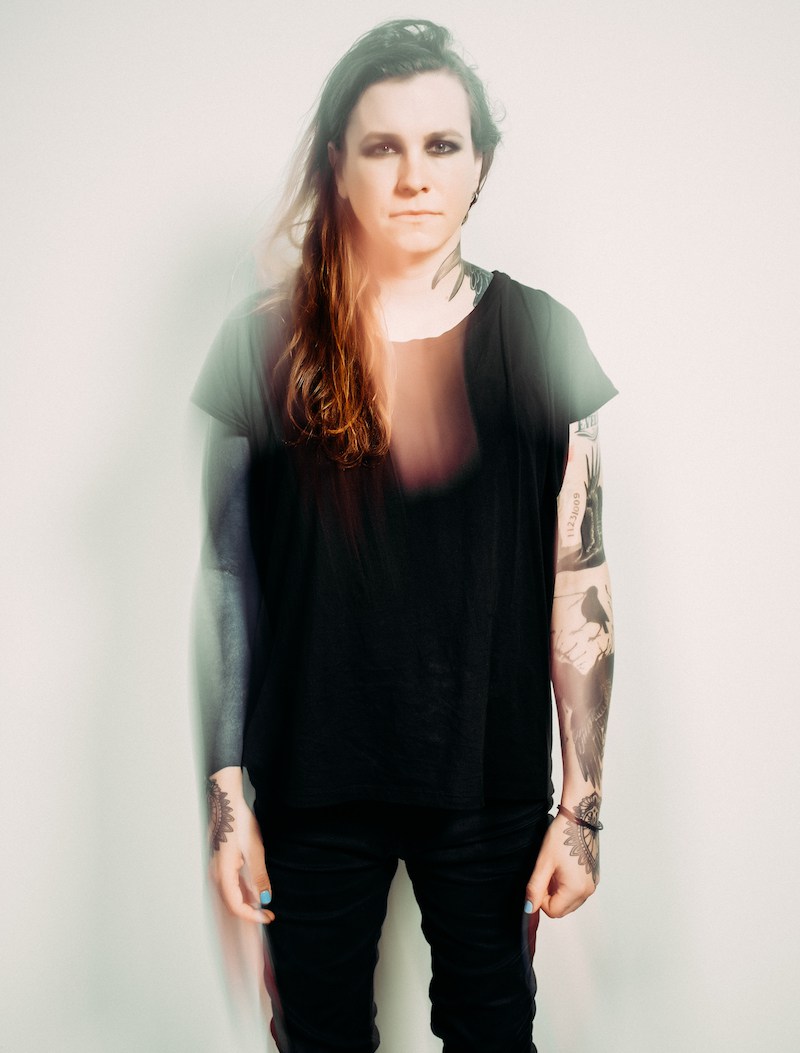 Laura Jane Grace of Against Me!  Photo by Casey Curry

“Is that a boy or a girl?” Fletcher asked very seriously through jack-o-lantern teeth.

“A girl. She was born a boy but always felt like she was supposed to be a girl so now she’s a girl,” I explained casually.

“So, is she like my uncles?”
“No, that’s different. That’s when boys find other boys cute and girls find other girls cute. Laura says she still thinks girls are cute but she just feels like she should’ve been born a girl,” I say.

Fletcher stopped talking and just watched the video play out. Then he asked, “Why when she sings doesn’t she sound like a girl?”

Without wanting to explain the inner-workings of hormone therapy, I quoted something Laura had said in repeated interviews I’d read and watched.

“It doesn’t work that way,” I answered bluntly.

My son is quite analytical and currently, a rule-follower. So, learning about Laura’s transition kinda blew his mind. So much so that he felt compelled to share it with others, which led to another one of those moments where what your kids say to other grown-ups catches you finding your own truth. “My mom’s trying to interview a singer who used to be a boy but turned into a girl,” he told his friend’s parents.

l responded honestly, “Her music has helped me get through the most difficult time in my life. I hope I get to meet her so I can thank her and write about what she’s done for me.”

The schools my kids go to are relatively diverse. Yet, it seems my music has made their world even richer by, surprisingly, pointing out more similarities than differences. I’ll be curious to see which artists will be there to help educate my son when he’s twelve. But, for now, I’ve given both of my children permission to use music to say what they feel, especially when those feelings might seem contrary to the image they’re putting out to their friends, teachers and the rest of the world.

Recently, Lyric confided in me that she sang a swear word in a song. I detected guilt in her voice so I reminded her that she can always express herself fully through music.

“Ok,” she smiled more confidently but not yet ready to let me see her imperfect self. “I’ll sing the H-word from now on in my room.”

This article was originally published in Mutha Magazine.