Artist Profile, Music With A Cause, Up and Coming
by Julie Simmons
0

Face-to-face interviews can awaken the highest form of mental precision.  Like a hunter or a great three-pointer, the heart rate steadies itself and the eyes dilate a little.  Time expands on the vertical axis when all of the senses are fully engaged and absorbing information for the sole purpose of…conversation.  When locked into someone’s personality, a writer can transform into a sculptor. For me, I use words to chisel the artist into something that’s better than how they see themselves.  Because, well, that’s what I see.  And then, it’s over.  The musician dissipates into the tour the way the blow-ball on a dandelion loses itself to the wind.

In the case of interviewing the keyboardist and guitarist for Lebanon’s Mashrou’ Leila, Firas Abou Fakher, the choices were limited.  There couldn’t be a face-to-face interview when we’re half a globe apart.  A phone interview was offered.  However, to avoid cultural misunderstandings we agreed upon a written interview.

“I think he’s the brains behind the band,” my Lebanese friend, Serene, disclosed politely as I scanned through videos and images of his face. (I was hoping to bring full animation to the static email that I’d receive).  I designed levels of questions that should have built up to a meaningful exchange.  But, I sensed that Firas would probably halt correspondence after the first round of questions.  The band is simply too busy.

I was instructed to email questions to the band’s press manager but all of the answers came directly from the artist’s personal email:

Julie Simmons-Trapp: First, since we’re corresponding by email, I’m curious to know where you’re emailing from? A hotel? What country or city are you in right now?

Firas Abou Fakher: Well, I received this email while I was in Copenhagen for a day of rest after our London and Malmo shows.  But right now I’m replying at my parents’ house in the mountains of Lebanon, far from the city.

JST: For those who aren’t in a band, it’s really difficult to imagine how musicians can just get together and play their instruments with a sound as accomplished and unique as what you’ve achieved with Mashrou’ Leila. Could you possibly explain to me how musical style is born?

FAF: Achieving a style in music is a fluid and dynamic thing, it involves deciding what type of person you are at the moment of creation, where you see yourself going and what you’ve accomplished. And knowing how difficult it is to actually remain rigid with these things.  I would say that we are never really sure when we start writing, where we will end up.

Julian Barnes writes: “The painter isn’t carried fluently downstream towards the sunlit pool of that finished image, but is trying to hold a course in an open sea of contrary tides.”

I think that is a better reflection of the process. 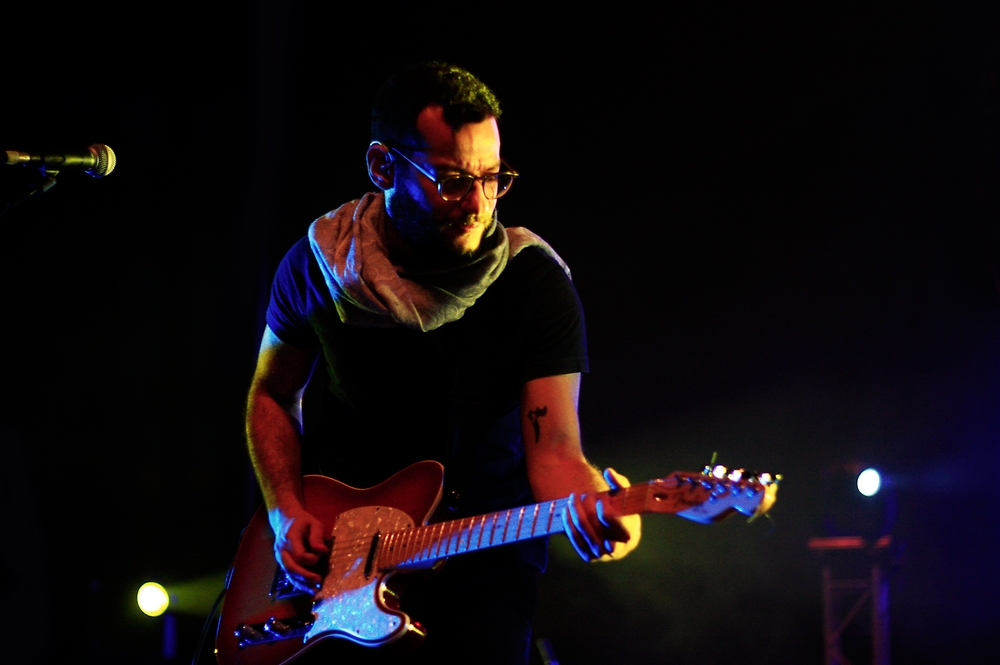 JST: How has the band’s identity changed since it was formed 8 years ago?

FAF: Tremendously. Apart from the obvious things like growing older and working with several studios, and producers and artists; the things that shape us are varied and often contradictory. Some things remain steadfast, like our determination to produce a flavor of Arabic Pop that does not conform to the ‘success model’ of the Arab pop star, and our devotion to the Arabic language. But apart from that, we have all grown as individuals and as a group.

JST:  I heard that your audiences are very diverse.  What do you think it is about your music that’s attracting people who are old and young, Arab and non-Arab…?

JST: What is the most meaningful thing someone has said to you about your music in the past year?

FAF: Being a composer in the band means I am partial to the type of praise that goes: ‘we don’t speak the language, but the music touches us immensely’. But I think the most touching things are simpler things [like] when someone comes up after a show and says that our music has helped them challenge their views and stand up to their surroundings positively. I think it takes a lot of courage to admit that to anyone.

JST: In many interviews, people ask you about the band’s lyrical messages. And, you guys are very consistent in saying that “it’s about the music,” not necessarily the lyrics. What do you want audiences to take away from the music, especially those audiences that don’t speak Arabic?

FAF: The way we write and compose our music is very different than most of the things you hear on the radio.  I think that’s because our goals are different. We usually get asked why we record outside the Middle East, why we go to Canada or France or wherever. And the answer is simple: In the Middle East, most studios, and producers and teams work to have a song or an album ready as quickly as possible, and have it ready for consumption the soonest it can be. This has created a system that is very efficient for that, but highly rejects other ideas and methods. We like to take time, time in writing and arranging, time in developing and recording, and time in finding the right people to help us on our mission. And from there you begin to understand that we treat each song and album as a craft, an object that is more than a collection of disparate singles. And so the mood and the colors of our music is something that we think people can pick up on, and sense the shifts and changes that it took to get there. We definitely want people to enjoy what they’re hearing, but maybe begin to see the spaces and the thoughts that we were in as well.

JST: What guitars do you play?

FAF: [When playing] live, I have a trusty Fender American Deluxe Telecaster. That thing can take all my abuse and it’s been with me from very early on. In studio I’m more eclectic, usually trying more things out, older guitars. Two of my favorites are my ’63 Harmony H76 guitar and my ’73 Hofner Violin Bass. But both are too fragile (and too pampered) to be taken on tour.

JST: How has your guitar playing changed over the past eight years?

FAF: I don’t view myself as much of a guitar player, as in: I can’t pick up a guitar at a party and impress people with my skills. I appreciate songs and good songwriting. The guitar is what I grew up on so it’s a natural choice for beginning the process of composition, but I also (following the departure of our keyboardist two years ago) play and record the keys in the band. 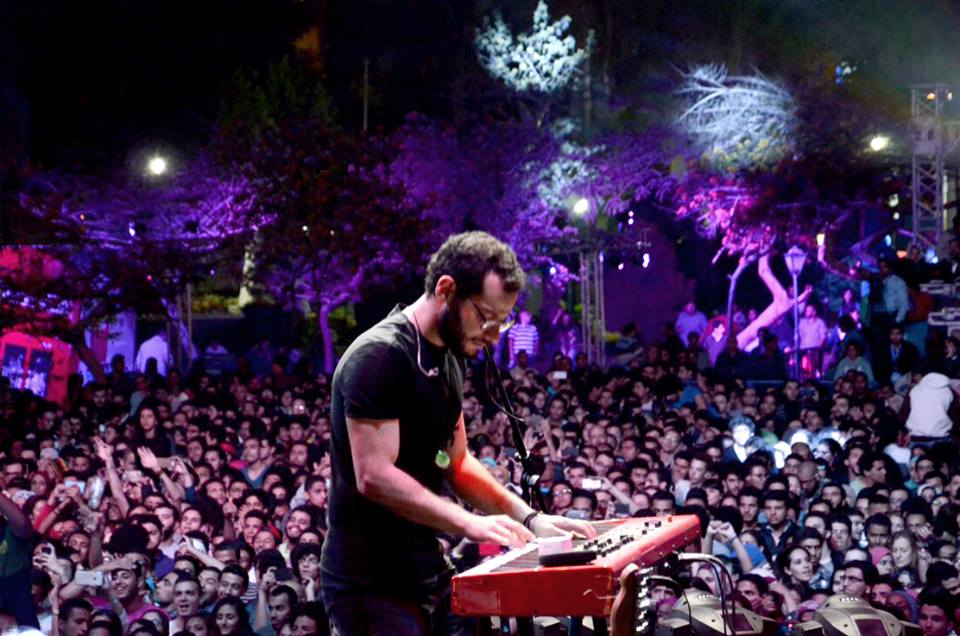 JST: I watched an interview with you and other members of the band on YouTube and, sorry… But I noticed you had a tattoo on your left bicep. What’s the meaning of that tattoo?

FAF: That’s something that Hamed and I got last year.  It’s basically a ‘3’ with an apostrophe carved out of it in Arabic. It has become the logo of the band, without being too explicit.

JST: Is there a place you’d like to perform but so far, you haven’t been able to?

FAF: It’s funny that the places that seem so far away in our lives are so close to us geographically. We would love to have a show in Syria or in Palestine.

JST:  Do you think Mashrou’ Leila has the ability to bring a greater understanding of the East to Westerners?

Naturally, I attempted to email follow up questions but they went unanswered.  Like the rest, he vanished back into his world.  I don’t hold grudges when speaking with any artist.  After watching the Radiohead documentary, “Meeting People is Easy,” I’ve come to realize that if you’re lucky enough to talk to someone as they’re ascending, you’re no longer speaking with a willing or eager donor.  You’re speaking with someone who must now uphold the tedious responsibility of shedding a little blood for strangers.  And, really, shouldn’t the music be enough of a sacrifice and offering?

Note:  After posting this interview, I emailed Fakher to thank him for the interview and included links to both Mashrou’ Leila articles. Fakher rather promptly emailed back expressing gratitude and hoping that he had provided answers to my liking.  Indeed, he did.