Hiring a Professional Songwriter to say “I Love You”

Music Industry, Uncategorized, Up and Coming
by Julie Simmons
0

In the opening scene of Spike Jonze’s 2013 movie, Her, the camera spies on the protagonist, Theodore Twombly. Theodore is in a sterile office cubical, working for BeautifulHandwrittenLetters.com. Despite his apathy toward life and relationships, he gets paid to write love letters for people struggling to express their emotions. The movie takes place in the future, at a time when empathy and human connection are in critical condition.

That scene immediately comes to mind when my friend, Jaime, sends me an email. He tells me that he’s commissioning an artist to write an original song for his grandma’s 90th birthday and he wants me to observe the process. Jaime works as an account director, but he also moonlights as a musician and songwriter. So, of all people, why would he pay a website to write a song for his grandma? Why wouldn’t he just write it himself?

“The gravity,” Jaime admits solemnly. “The gravity of my grandma and what she means to me. I felt that my attempts, however cute or touching, would be meager.”

And so, Jaime calls upon Songfinch, a new company that matches gift-givers with songwriters to compose the ideal, personalized tune. Downwrite.com is another site that offers the gift of song.  However, Downwrite’s primary positioning is to help music fans have a piece commissioned by their favorite songwriter. In each case and before any of these sites existed, customizing music has been pretty limited for non-musicians. You had to know someone. Or, maybe by donating $2500 to an artist’s Kickstarter fund, you might be awarded a personalized song. So, to pay $200 for a “radio-quality” song in one week seems like a sweet deal. All you have to do is provide some personal background about the song’s recipient.

For his brief, Jaime scripts a montage of memories of his grandma over the years. After reading his lengthy essay, I wonder how the songwriter is going to be able to assemble all of these directives and snapshots: the feelings of love and gratitude, a reference to Cornish pasties at the kitchen table, “snippets of the chorus sung in Spanish,” “a simple flourish of a violin line or something orchestral as a nod to her love of classical music,” and all neatly packaged into a folk/pop song. With my skepticism strapped into the passenger seat, the brief is submitted and soon, a sightless web forms between Jaime and the songwriter, John Russell. 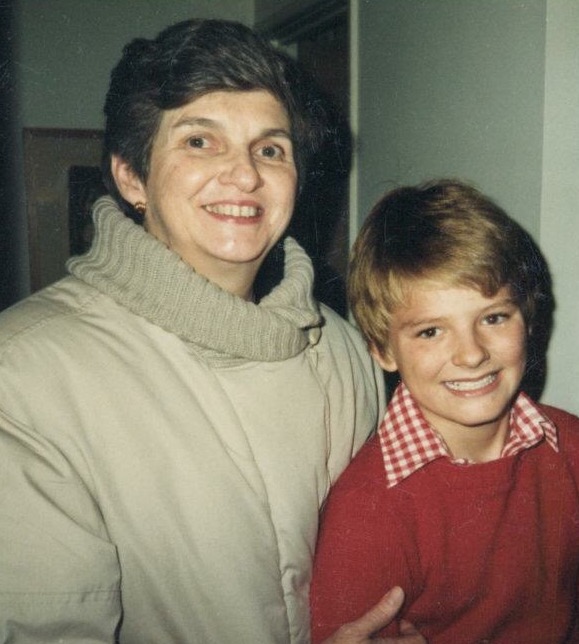 John is a professional singer-songwriter residing in Savannah, Georgia. In addition to composing for Songfinch, he composes tracks for commercials and TV shows as part of his sync licensing gig.  In addition, he also maintains a photography and video business. He’s proficient in nine different instruments and has his own home recording studio. In other words, all of his assignments can be done swiftly, conveniently and economically.  And although he only gets paid $100 per Songfinch assignment, he’s capable of releasing tunes within a few hours so he feels his hourly rate is fair — at least, for now.

During the creative process, John vacillates between applying songwriting techniques and surrendering to the artistic flow. He compares his methods to that of a graphic designer. He looks for the big, emotional idea first (which usually ends up being the chorus) while the verses handle the details that fill in the rest of the song.

I ask bluntly if, as a prolific artist, he ever draws from pre-composed melodies and simply inserts details from the brief. With an infectious laugh and a smile I can fully visualize over the phone, he replies, “Ha, I could work that way. But, it wouldn’t be authentic to ‘that story’ or ‘that person.’ Instrumentation and melody are always communicating to the listener. It’s like when you listen to classical music, you start imagining a whole story in your head. If I used a preexisting melody, you’d know it subconsciously. Because of that, I always have to start from scratch.”

“If I used a preexisting melody, you’d know it subconsciously. Because of that, I always have to start from scratch.”

With the volume and frequency of new music that John and other Songfinch artists submit, there’s always a chance that one of these commissioned songs is going to end up going viral or perhaps even land on a TV show. So, what happens then?

“We expect that one of these songs will find a home in some sort of commercial or TV show or film,” says Josh Kaplan, lawyer and co-founder of Songfinch. He adds, “If that were to happen, we have to get the artist’s permission and then we split all income with them equally. Songfinch owns the master recording and the songwriter owns the publishing. There’s no re-recording restriction so an artist could re-record a song and create a new master that Songfinch does not own. Totally up to them. And, finally, the recipient receives a perpetual personal license to download the song and to share for personal use.” 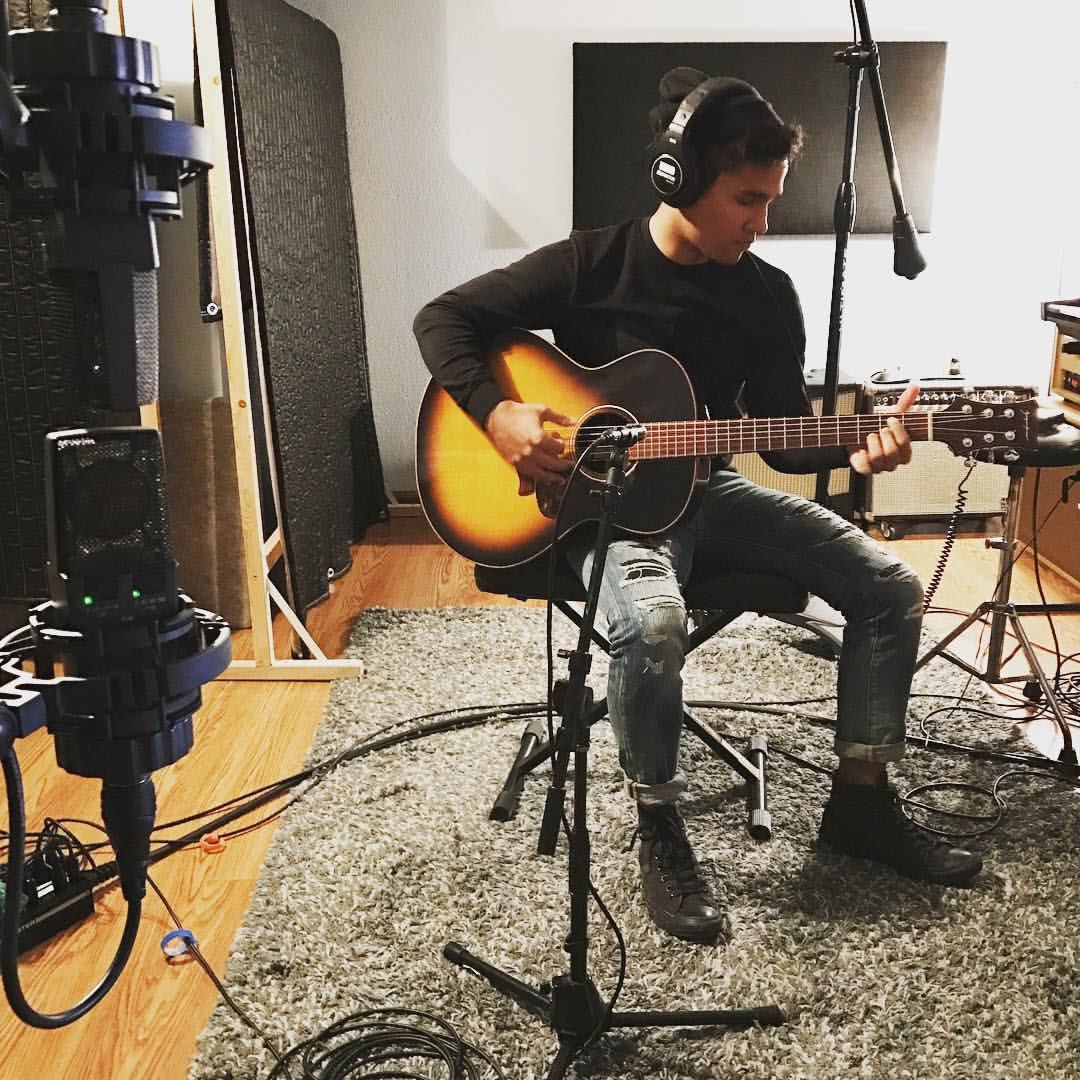 Less than a week after submitting his brief, Jaime’s finished song is delivered electronically through a representative. At Songfinch, there’s no direct contact between the purchaser and the songwriter. Revisions are allowed but limited. Fortunately, Jaime loves what he hears. And, when I hear it, it sounds like the song was perfectly tailored for his grandma. I’ve never met her but based on the autobiographical essay, this is a match. All of Jaime’s random recollections have taken on a new meaning; much like the way cinematic montage theory maintains that when two images are juxtaposed (like two flashbacks), a third perspective emerges.  In this case, it’s mine…

As a general music listener, I wouldn’t have thought there was much depth within the lines that rhymed “table” with “stable,” but as I witness how Jaime’s memories are so carefully interwoven into the song, I finally get it.  Yes, there are songs that are written lazily or with the intention of becoming a hit.  But, for the most part, none of the songs I’ve listened to were ever written for me.  They were written for someone else. Sometimes, they resonate with me — almost synchronistically.  But that doesn’t make it a better song, nor does it make the artist a better lyricist.  It just means that there was a connection.  Now that I’ve experienced that revelation, I’ll never critique someone else’s lyrics again. The articulation of emotions is as much a part of the gift as the recorded music;  a notion that forces me to dislodge my final question for John that I’ve been suppressing.

“So, I have one last question and this is gonna sound like it’s coming out of nowhere. Have you ever heard of the movie, Her?”

“Oh, um. Yeah, I have,” he chuckles reflectively. “I didn’t see it but I know it’s about a guy who falls in love with an artificial intelligence or something.”

I proceed to describe the opening scene of the movie.

“Do you think that hiring a songwriter is an indication that people are finding it harder and harder to connect with one another emotionally? I mean, was Jaime avoiding his own emotions by hiring you to say it for him?” I ask boldly but still fearful that I might be disparaging this entire concept and offending everyone involved.

John answers thoughtfully, “I think it’s a sign of humility to say ‘I don’t know how to say it. Will you help me say it?’ Maybe by hiring someone to help them with that, they’ll actually learn something about themselves.”

On the night of his grandmother’s 90th birthday party, Jaime presents John Russell’s song, Te Amo. He plays it off of a tablet so he could sit beside her as she listens and reads along to the lyrics on the screen.  Around the second line of the first verse, she begins to comprehend what’s been gifted to her as she cups her grandson’s left knee.  With tears lining her lower lids, her hand clenches every time she connects with a phrase.  By the end of the song, she gives Jaime a big hug and exclaims repeatedly, “I love it.  Thank you.” 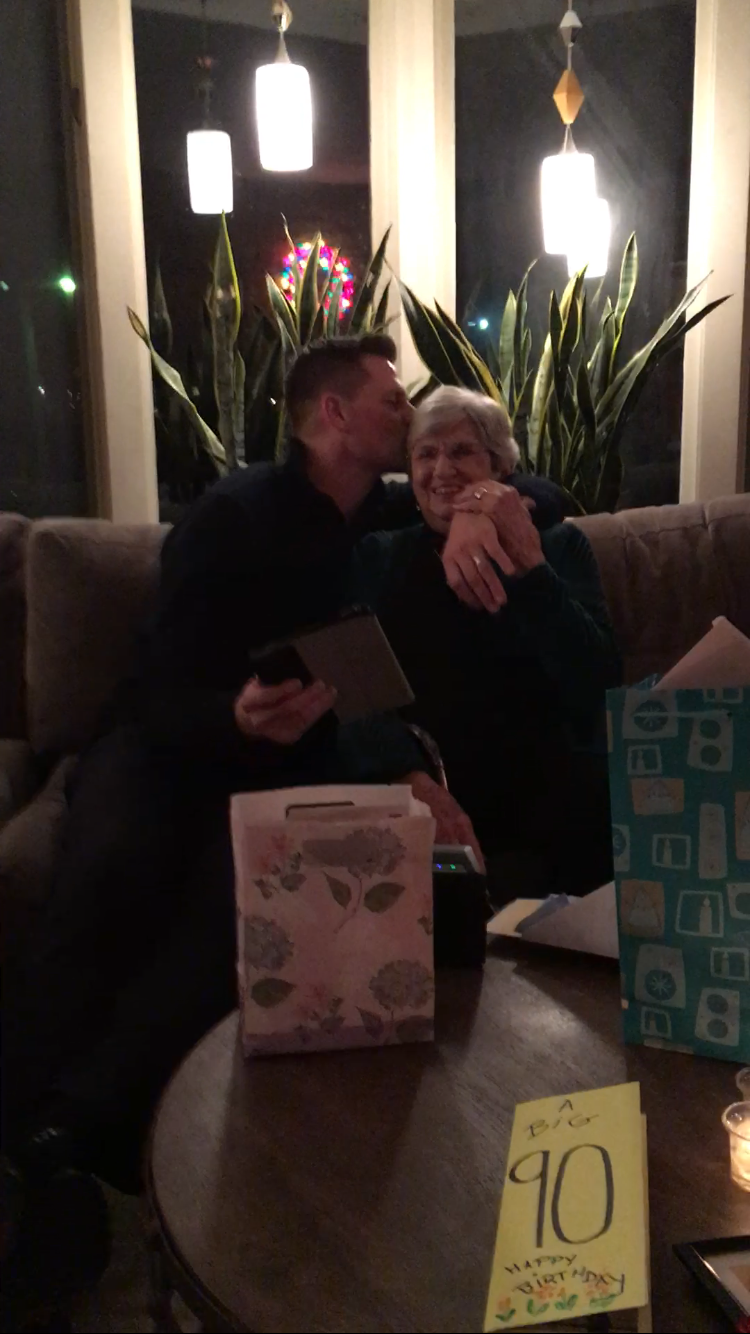 Jaime and Grandma at her 90th birthday party

To learn more about the artist, John Russell, go to his website here.

And if you’ve never seen the movie, Her, you can go here to learn more.

To join in the conversation, look for Music Makes You Think on Facebook.