Music Interpreters for the Deaf: Do You See What I See?

Music Industry, Music With A Cause
by Julie Simmons
2

If you’ve been to a major festival in recent years, you probably noticed that music interpreters have become part of the overall experience. To a hearing person, an interpreter’s movements might resemble a cross between pantomime, acting and interpretive dance.  But, that’s definitely not how they or their Deaf audiences want to be perceived. And while sharing the stage with A-list musicians might seem like a dream job, the position is loaded with responsibility and expectations.

“Hearing people have said to me after a show, ‘I just watched you the whole time!  You’re so entertaining, dancing around.’ But we’re not stage dancers. We’re signing a real language,” Lucy Brotherton explains soberly.

Brotherton is a certified American Sign Language (ASL) interpreter in Austin, Texas.  At least 10% of her work involves translating the music of major artists at Lollapalooza and Austin City Limits. Hiring interpreters, like Brotherton, arose from a growing need to accommodate diverse audiences at festivals. Some Deaf attendees prefer to stand in the back at indoor venues so they can feel vibrations through the walls. However, sensory dynamics at outdoor venues make it essential to provide them with preferential seating and on stage interpreters. 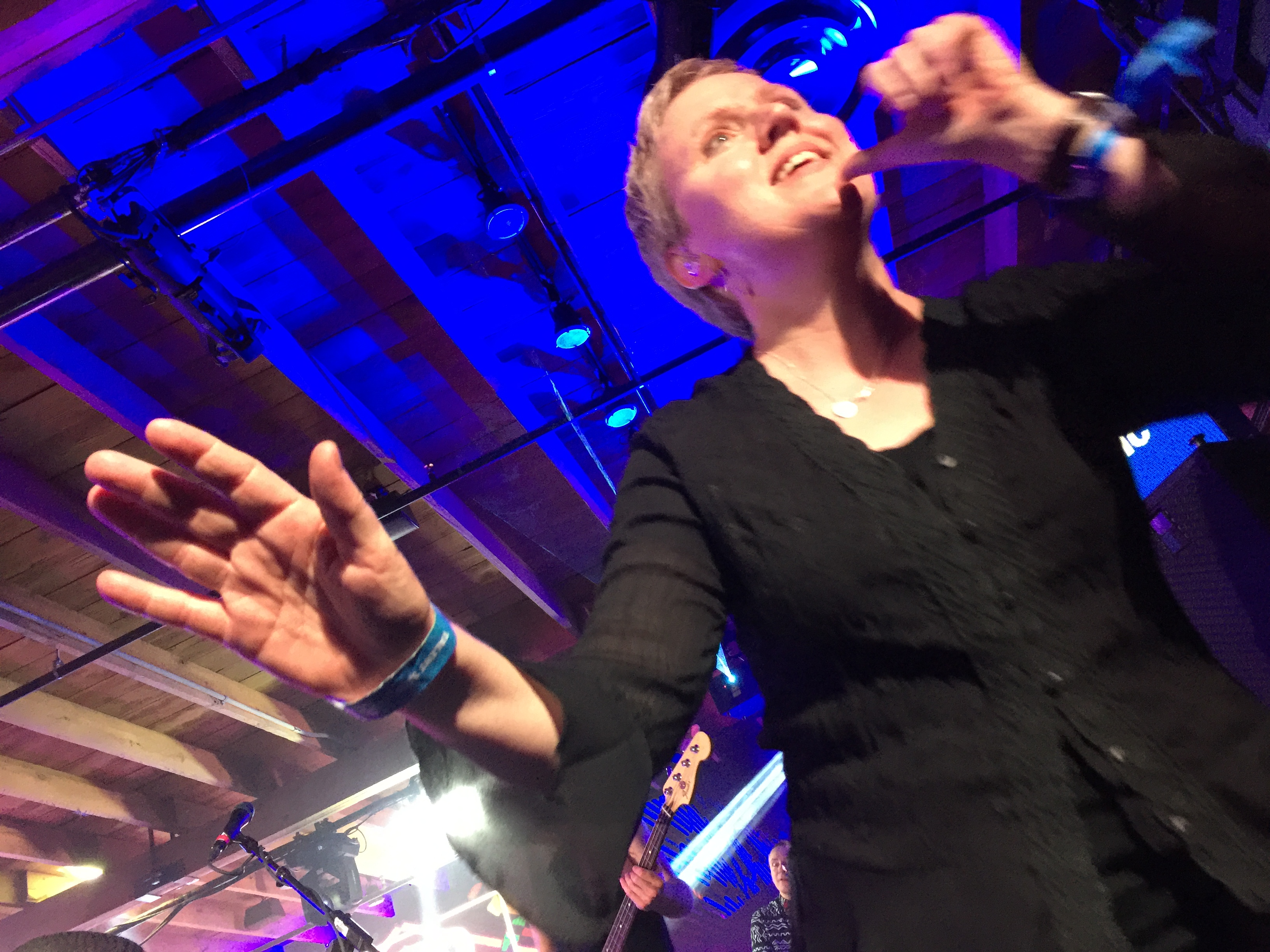 Brotherton reinforces the logic, “Deaf people ‘hear’ with their eyes and bodies. So they get the full experience of music if they can visually see the artist and the interpreter. By standing in front of the stage, they’ll feel the huge blow from the speakers while they watch the interpreter, the entertainer and the lights. We fight to get them on the corner of the stage so they’re in front of a speaker bank and close to us as well.”

With preferential seating secured at these key festivals, a debate ensues about the proper way to interpret a song through ASL. Some Deaf music fans prefer to be signed the written lyrics “in English order” so they can add their own ideas about the song. Meanwhile, others prefer a metaphorical translation.  Brotherton cites Beck’s hit, “Loser,” as an example of a highly poetic song that begs for each word to be signed verbatim.

She demonstrates, “When Beck sings  ‘In the time of chimpanzees, I was a monkey.’  People who know those lyrics, want those exact words.”  But sometimes signing word-for-word is just impractical.  In an interview with Priceonomics.com renowned interpreter, Amber Galloway, reveals a cheat sheet.  Signing lyrics is difficult enough but signing for rap artists can be almost impossible to emulate in ASL.  In a segment of his song, “Rap God,” Eminem raps at a rate of 6.5 words per second!  So, to accommodate, Galloway created an ASL shorthand against his lyrics. 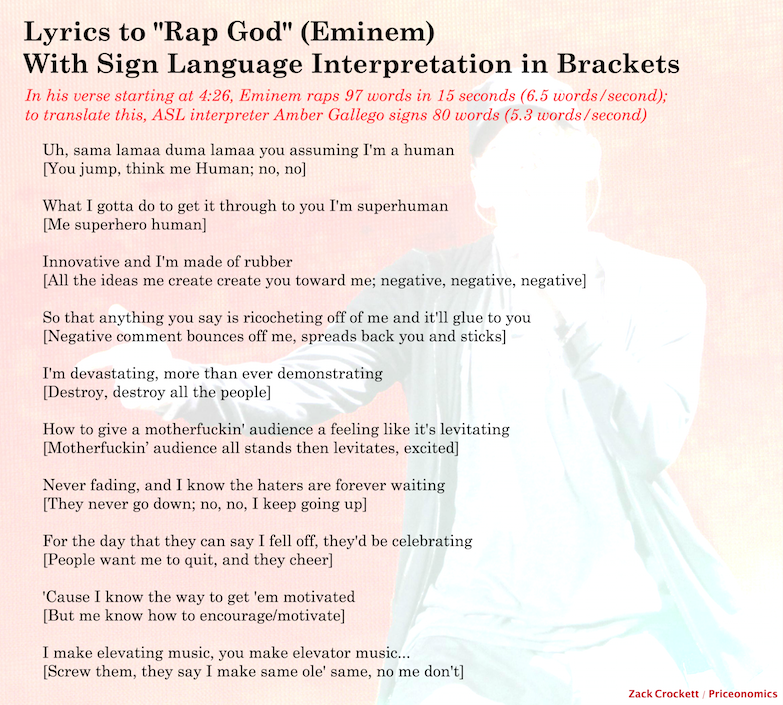 Now, in case you’re wondering if artists offer to collaborate with interpreters, the answer is…no. Aside from a few exceptions, interpreters aren’t allowed to work directly with the artist.  Therefore, it’s incumbent upon the person signing to do their homework before a show. Many will conduct their research using lyric and song-meaning websites in addition to reading published interviews with the artist or band.  But sometimes, even after all of this work, a song can still feel ambiguous.

JoAnn Rose Benfield (aka Jo Rose) works as a music interpreter.  She also happens to be Deaf.  Recently, Jo Rose was invited to collaborate with Galloway to analyze ‘Guns for Hands,’ by twenty one pilots.

“That’s a very powerful song,” Jo Rose writes me in an email.  “The song’s a metaphor for suicide and how people can help those who are struggling.  But at the same time, [the song] can be the cause for someone wanting to commit suicide.  Songs like these can be emotional;  And not just for us, as interpreters.  When we perform the songs at concerts, it can become emotional for our clients too.  So it’s imperative that our research, discussions and translation of lyrics are done with heart.” 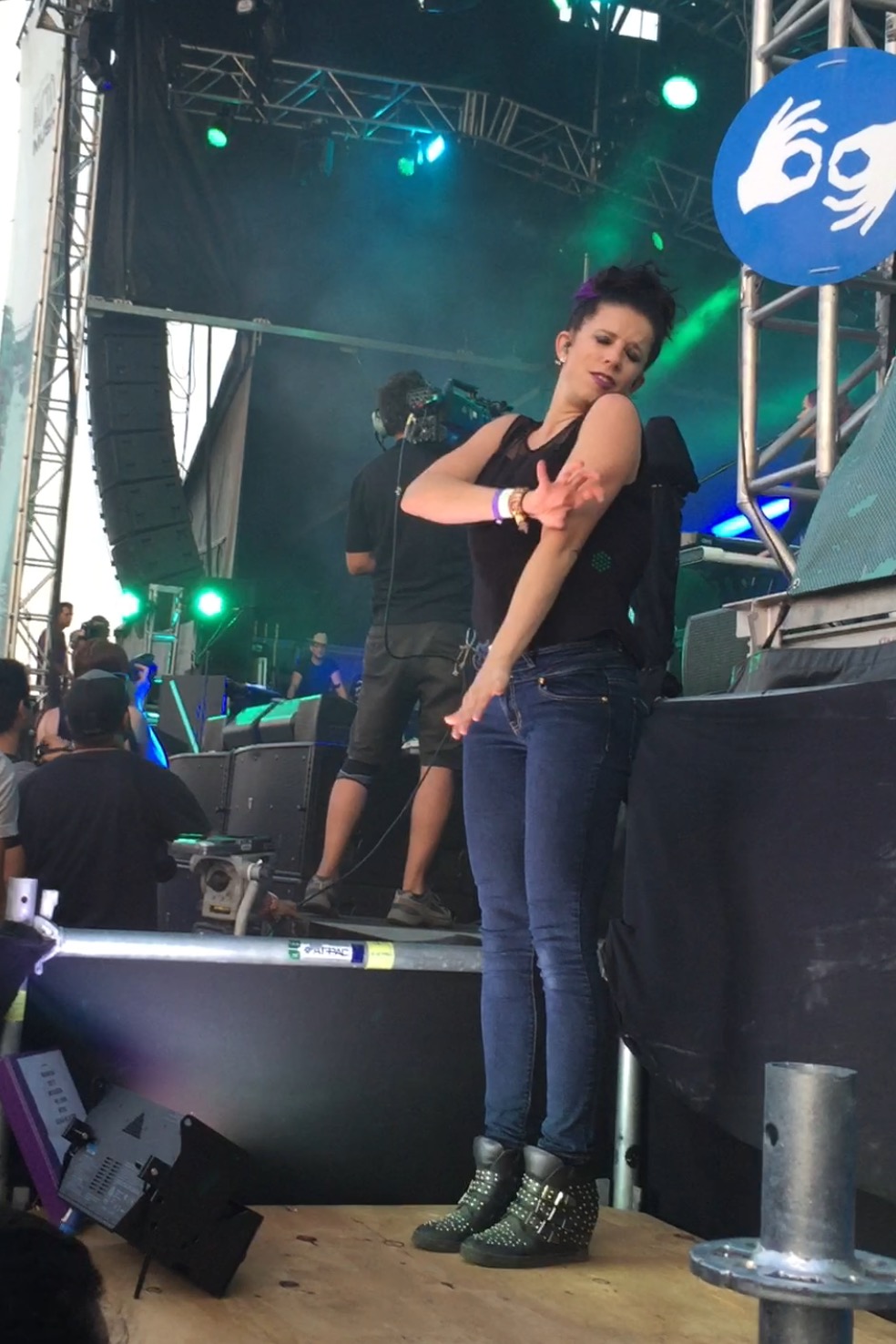 Comradery among interpreters is not only critical before the show, but also during the show. In addition to having an interpreter on stage, there’s usually an interpreter (or several) in the audience, known as “Feeders.” Feeders are there to suggest signs when the interpreter can’t hear the singer well from the stage monitors or if the band plays a song that hasn’t been rehearsed well enough.

Brotherton reports, “We have to learn about 100 songs for a festival.  So sometimes I’ll ask another interpreter to feed me a song from sheet music in the crowd.”

For anyone who’s actually watched interpreters at a show, analyzing and conveying lyrics is just a part of the job description. Another component is covering instrumentation. While intentionally wearing solid shirts in colors that contrast their skin tone (so communication is clear), interpreters squint and wince as guitarists hit strings high up the neck of their guitar.  They typically draw their faces long on low bass notes or tremble to a drum beat. Especially during these instrumental parts, they’ll also cue their fans to what’s going on in the crowd around them.

Brotherton sketches a scene, “We’ll try to show there’s someone screaming over at stage left here.  Or, there’s a mosh pit over there.  Or we’ll describe the interaction between the stage and the audience, like a call-and-response, over there.”

I pause during my interview with Brotherton.  I’m taking a moment to just absorb how truly spectacular it is that interpreters are able to convey an incredible amount of information despite numerous onstage distractions.  She adds that pyrotechnics are the biggest distraction.  Whereas, to my surprise, being approached by an artist onstage (like what happened at the 2016 Lollapalooza festival) actually isn’t.

During the opening bass chords of “Under the Bridge,” Red Hot Chili Pepper’s front-man, Anthony Kiedis, deliberately and respectfully perches himself squarely above Galloway.  A spotlight drapes him from above like a descending angel while Galloway is still mostly cloaked in darkness.  About midway through the song, Kiedis hops down from his platform to personally serenade her as the spotlight embraces them both. 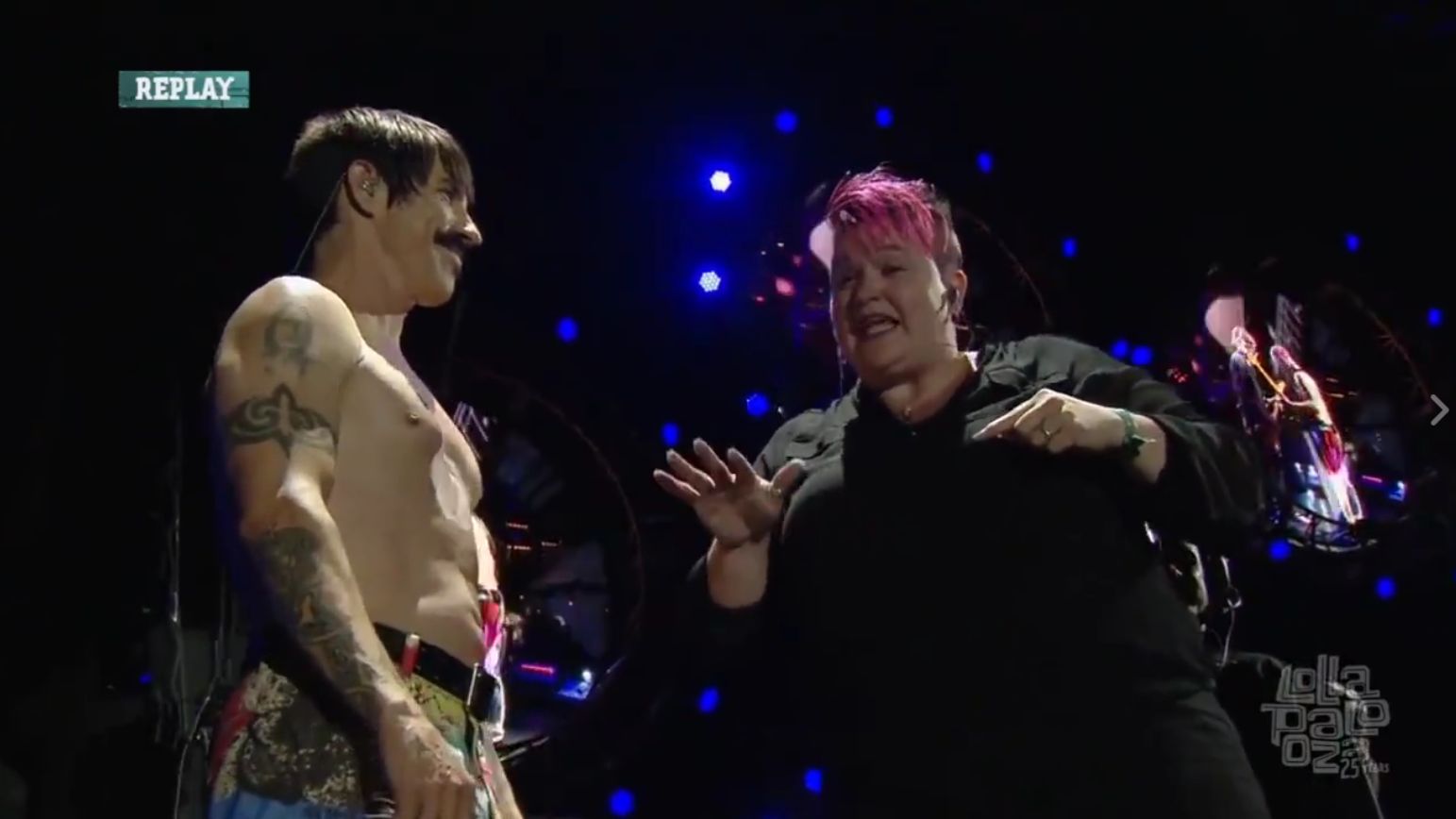 Brotherton provides insider commentary, “The beauty of that moment is that he was singing directly to Amber but she didn’t stop working and interpreting.  We can call ourselves ‘performers’ because we want to deliver that.  But ultimately, it’s not about us.”

In this way, the role of an ASL music interpreter is a paradox.  The full range of humanity seems to jump off their body but it never takes a stage dive.  And then, sometimes out of ignorance (sometimes out of arrogance), the interpreters are dismissed and are quite literally left to perform in the dark.  In these situations, further assistance is required from the trusty Feeders.

“Some artists don’t know that when we’re not getting a light, they’re shutting off a whole section of their audience. Kendrick Lamar didn’t have lights on us.  Sometimes that’s the stage manager just being unaware and they eventually fix it. Sometimes, it’s on purpose. At the last Austin City Limits, Bob Dylan did not want a light on us.  He shut our lights off. Whenever this happens, the Feeders pull out a bag of flashlights or they use their cell phones to shine on the interpreters.”

Designated areas for the Deaf isn’t currently enforced at smaller venues, but at least they seem to be becoming a staple at major festivals.  When I flashback to the first interpreter I saw at Lollapaooza, I recall the energy that emanated around the interpreter.

“We can call ourselves ‘performers’ because we want to deliver that.  But ultimately, it’s not about us.”

I ask Brotherton curiously, “What’s it like to be on the stage with all of this attention ping-ponging between you and the audience and the band? What does all of that transference of energy feel like?”

Brotherton summons her own flood of memories and sighs, “I feel like I’m standing in the middle of…of this…lightening bolt that’s going out into the audience.  And I’m just trying to shape it in a way for Deaf people to appreciate.”

To join the conversation, look for us in the Facebook group:  Music Makes You Think.