Why Some Mourn for the Dead Artist They Didn’t Know: A Retrospective Look at Elliott Smith

My view of the speeding expressway was blurred by a few teardrops on October 21, 2003. I remember driving to observe focus groups for my day job in the account management side of advertising and feeling that I just needed to take the day off. Everything just felt so, so…corporate. The “corporateness” seemed to clash with the musical world that steered my thoughts on long car rides after even longer business hours. It was hard that day, sitting in a dark room, watching consumers talk about a $3.98 household product from behind a one-way mirror.  Elliott Smith, someone very important to me, had just died. No one seemed to understand. Actually, I could hardly understand how I could be so affected by someone I never actually knew.

Like many who didn’t live in Portland, the first time I heard Elliott Smith was when I listened to the soundtrack of Good Will Hunting in the winter of 1997. I was at Tower Records on Clark St in Chicago. I slipped on a pair of communal headphones to listen to songs at a listening station.  The seemingly endless racks of CDs got swallowed up by the music as I listened to “Between the Bars (Orchestral).” Searching for the source of this beautiful sound, I became instantly transfixed by the CD cover inside the plastic jewel box. I hadn’t seen the movie yet so I just saw this photo of Robin Williams and a young guy (Matt Damon) connecting with one another while goldenrod leaves filled the background. (In writing this, I just answered my own question as to why I’ve been listening to Elliott Smith every autumn since 1998. It’s a neurological thing). I skipped to track 3, “Angeles” by Elliott Smith and listened as his gentle voice seemed to float on top of his carefully selected patchwork of chords. From there, I went backwards (as fans often do) consuming every solo album he ever made prior to Good Will Hunting. My admiration for his work only grew stronger the further back I dug.

I was fortunate to see him once at the Cabaret Metro in Chicago. I remember going across the street from the venue to grab a bite to eat before the show. Inside the tiny dive was Elliott and members of his backing band, Quasi. He was eating a bratwurst.

“Did you go up to him?” A friend of mine later asked me.

No. This was an honorable moment when you just stand there and tell yourself, that’s Elliott Smith eating a bratwurst and you’re always going to remember this moment because it’s when you realized that he was just a human. Everyone in the place knew it was him but I didn’t see anyone approach him. I think we were all just saying “wow” and “thank you” in our heads.

Among Elliott Smith fans, it’s become cliché to report that when he performed, there was a collaborative hush. But, it’s true. Even when a crowd is being respectful during a show, there’s always the sound of bartenders doing their job by popping open tabs and tossing empty beer bottles into a mass grave. But not during the song, “Between the Bars.” Every time Elliott drew in a breath to start the next verse it sounded like the back end of a sob. The crowd that night was breathless, including the bartenders.  All that was heard was the sound of collective receptivity while this one man opened a vessel and channeled his talents from the depths of his soul.  But if a recording of that show exists, somewhere, I’m fairly certain I yelped at the opening chords of him playing a cover of George Harrison’s “Give Me Love (Give Me Peace on Earth).”

Among Elliott Smith fans, it’s become cliché to report that when he performed, there was a collaborative hush. But, it’s true.

I never got to interview Elliott. Of course, a large part of me wanted to — perhaps even felt entitled to — but I respect artists’ privacy. By the early 2000s, he seemed tapped out by the media. He looked tired so I never tried to meet him. However, at the time of his death, I happened to be interviewing close friends in his music circle.

The band that’s on record for having toured the most with Elliott was Grandaddy. I was scheduled to interview Grandaddy’s lead guitarist, Jim Fairchild, just days after Elliott’s death. I’d interviewed Jim during Grandaddy’s previous tour. Even back then, Jim had told me about hanging out with Elliott and how they were close friends. So knowing what had just happened, I asked if Jim was still up for the interview.  He was…so we met in the basement of a Chicago venue I can’t recall. We sat in a white room. We were supposed to talk about a story idea I never ended up writing. Jim was still visibly distraught over the sudden death of his close friend. He spent the entire time talking about Elliott and pinching the inside corners of his eyes to press tears back into place. As he was speaking, I could tell that Jim was disarmed as he shared countless thoughts and memories with me. During the interview, I sensed my journalistic agenda change from my original story idea to a feature story about the death of Elliott Smith to this all just being too private to share. When the interview was over, Jim asked me unselfishly, “Did you get what you needed?”

I looked at my mini cassette tape recorder and realized that although the red light was on, I had accidentally slipped a dial into pause mode. Nothing recorded.

The next day, I met with the lead singer and guitarist for Earlimart, Aaron Espinoza, at Chicago’s Schuba’s. Aaron was close friends with Elliott as well as Jim. He’s not only featured in the documentary about Elliott Smith but the movie’s title, Heaven Adores You, is drawn from the Earlimart song of the same name that was released a year after Elliott’s death. Like Jim, Aaron had a lot to say about Elliott as a musician but also as a friend. A week later, I received an email from another friend and musical colleague of Elliott. He asked if we could meet after his band’s show in Chicago because he needed someone to talk to about what had happened. 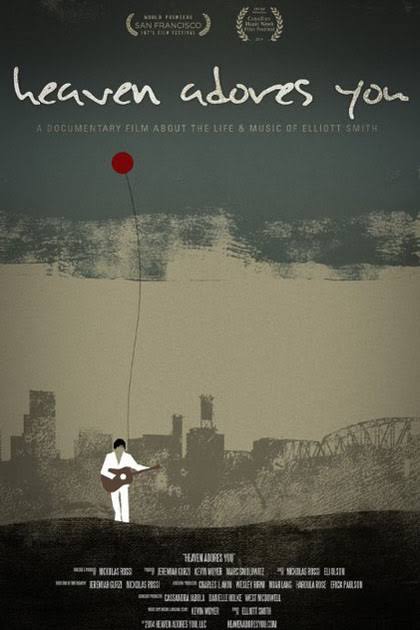 You can learn a lot about a person in the days following their death. The memories aren’t as cooked and processed as the anecdotes people eventually prepare for their public lives when they’re asked, “Oh, you knew him? Really? What was he like?”

With respect to all of the musicians who spoke with me in confidence, I can safely say that they all felt Elliott was a talented and extremely loving soul with a good sense of humor. If all of the guys I spoke with had anything in common it was that they all shared a love for Elliott in a way that can only be achieved when people delight in the company of another person without any expectations. (What a rare circumstance it is to have appreciation without expectations).

I’ve long wondered why I was so drawn to Elliott’s music. Some of his songs like “No Name #1”. about ghosting from a party, still speak to me like a page ripped from my own journal. (I’ve always struggled to fit in).  He had a gentle and melodic way of expressing anger.  (I fail to experience cathartic anger, only gnawing irritability). But for the most part, songs like “Needle in the Hay” or “Everything Means Nothing to Me” have little to do with my life just as people who knew Elliott maintain that not every song he wrote was about him. This led to a theory about good songwriting and why I mourned for an artist I didn’t know:

There are a finite number of lifetime experiences for every person. And for each painful experience, there is an opportunity for empathy – times when we can say “That happened to me too. It hurt and I know how you feel.” But, again, those moments are numbered. Brilliant songwriters like Elliott Smith can create a musical shortcut so we end up with more opportunities for empathy or compassion. Brilliant songwriters can generate concern for a cast of characters you would either ignore (like a person on the dark side of a one-way mirror) or judge (like someone afraid to confront their own fears). Most magnificent is when a song or an artist transforms an individual’s prejudice into compassion like Elliott has done for me. That is truly holy. That is why, for many, music is religion. That is why I think I actually shed a few tears the day Elliott Smith died. I think I feared I’d lost maybe a key artistic vessel to human compassion.  But, of course, I didn’t. I still play his catalog often, especially in Fall. Great songwriters are like the Fall. They drop their lush, beautiful leaves and blow away with the wind…but they always return.

Heaven adores you, Elliott. Thank you…

To listen to “Between the Bars”:  https://www.youtube.com/watch?v=p4cJv6s_Yjw

To learn more about the recent documentary “Heaven Adores You”:  www.heavenadoresyou.com/